First day cycling, wow, it has been a little bit harder than i expected.

It was raining to start, between the final close down in the flat and waiting for the rain to go I did not leave until 10:30, probably a good two hours after what I expect my new routine to be. Had it not been raining i would’ve been very surprised, I have been telling everybody that the rain was going to start as soon as I left. Had I left tomorrow it would rain tomorrow.

The reality is that i have loaded the bike more than i should have. I should really have drawn the line well before the kitchen sink rather than at the kitchen sink. Never mind, there are a few lesson learned from today, well, actually just one big one.

#1 Bicycle touring and weekly food shopping do not go hand in hand!

The total for the day it’s all 27 miles which is less than half of what i expect to do when i am at full speed. 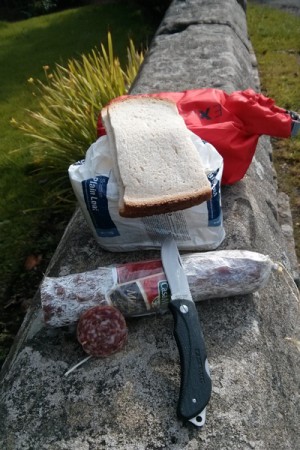 will see, I think that kind of distance is reachable it’s just a case of shed in a bit of weight from the bike and indeed for myself as well as building some muscles in my legs. finishing this lovely salame from Modena will have the twin result of lightening the load and adding proteins (I like to think).

Incidentally while I was having lunch I did not get any rain, there must be somebody watching over me, granted, very intermittently, but watching none the less.

The weather looks fine tomorrow i’m sure i will have my personal rain cloud following me but I’m hoping to do at least 40 miles. If i do that it should be possible exiting Scotland on Monday morning and getting to my first house call with time to spare.