I’m starting to make sense of this existence. I’ve been in Uruguay for a bit more than a week and getting used to this Work Away life. to start with it was a bit tricky as i did not feel I was pulling my weight, but then I realised that the rhythm of work to which I am accustomed are not really what passes for work down here. Life is slower and it appears that people might have found a different balance than in the north. Work is very much a mean to an end and the end appears to be to have enough money for some food and drinks with friends rather than flash cars or keep-up-with-joneses items.

I’m rather unsure if this is a distributed mentality or if it is peculiar to the micro universe populate by Martin, the ex Tupamaro and last surviving revolutionary of Uruguay.

Anyway, in the spirit of relaxation I decide to take a bike ride to Punta del Este, the centre of gravity of excitement of the Uruguayan coast. It is located only 12 or so miles east of my location and the ride there is preponderantly flat. Unfortunately as soon as I put my feet on the pedals there appears to be a bell going off upstairs and the wind gets switched on.

Punta del Este is a rather swish seaside destination. The appendix of Maldonado, the original local town and the district administration centre, Punta del Este appears to be made up of luxury condos and hotels. Apparently it has been known as the Monaco of South america and indeed, judging by the fact that donald Trump is investing, it cannot be a dive.

As I cycle along the coast road I cannot but notice how many people there are on the beach, and this is early afternoon on a working day. Working day, that would be in the north I think.

I stop for a while people watching and to get something to drink, it is after all blue sky and fairly hot. After that I pick up the bike and go around the cape and onto the other side where I am met by a much fiercer wind. Luckily I’m exposed only for a few minutes, the time to take a couple of pictures and I’m heading for the centre of town and the shops, I need a small notebook to write down new words.

On the way to la Tienda Ingles, the really good shopping centre, I make some acquaintance with the local public art. The Madonna del Candelario is a reminder that, while governed by a coalition of ex marxists, Uruguay remains a traditionally religious country. The Didos, is however a much more recognisable image of Uruguay. A monument by a Chilean artist to commemorate all the victims of the sea.

The Tienda Ingles and the surrounding shops are rather good and, as well as finding all I need, I also have the opportunity to do a bit of price comparisons. Bearing in mind that things in Punta del Este can be as much as 50% more expensive than in the rest of Uruguay, prices still apear to be low.

Time to go back to the hostel, loaded with a little indulgence, a Panettone that I bought in the shop for the mighty price of £1.60. When I get back I discover that we have guests, and not any guests but bicycle touring guests. There are three of them: Alan, a French who has been on the road for three years and has made it to Uruguay leaving France and going the long way round. The other two are Tupac and Danielito from San Luis in Argentina. All of them are on their way to Brasil and the two mad Argentinians also have a trolley for their dog.

The evening is swell, we all eat together and endlessly discuss cultural differences and travel experiences. I have come to appreciate how much of a travel experience is to stay stationary and host travellers, not sure it beats the real thing though.

They take their time to leave in the morning and we take our time to get going too. Today and tomorrow, we are finally doing some serious work, and when I say serious I mean cutting the grass. Actually I am being a bit sarcastic here, the property has got an extended piece of land with a rather wild pond in it and cutting the grass all over the place turns out to be a two days job.

Much of the work was quite easy and the only interesting thing was seeing how much unused potential there is around the place. If I was Martin I would use the back as a camping ground, create a toilet facility and perhaps a grilling area and charge small amounts for a practically no effort work.

Perhaps these are all thought that I will keep in my head when I finally get tired of traveling and go and open an hostel in Central Otago.

The rest of the time appears to be me being the referee between Martin and Violet who, apart from the picture below, seem to get along like, well, like cats and dogs that don’t get along. 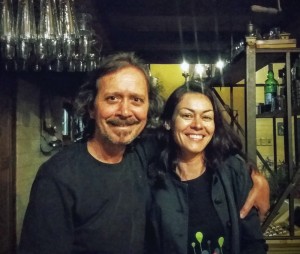 Last but not least, let me give you a little run down of the eating, drinking and speaking situation. I have had 4 meals without meat since I arrived and I still think I’m loosing weight. They appear to drink vast amount of whiskey (pronounced weke) down here, mind you <snob alert> it’s a lot of blended rubbish, not the classy stuff I drink <end of snob alert>.

As far as the language, it’s coming along nicely, I think I’m getting five or six new words per day and with my new notebook I am confident that by the time I leave for Argentina I’ll be chit chat ready.

One thing I’m getting acquainted with is South American music, mostly folk but with the occasional cool rock surprise. One below, from Uruguay, I particularly like.