I spent the night in a wonderful place, so untouched by moderndom that I had no mobile signal at all, let alone WiFi connection. For this reasons my posts have backed up a bit and I am writing today a two days post recaling both the events of yesterday (ride day to Wellington) and today (rest day in town).

The ride into York Bay (Eastbourne) was pretty easy. A little climbing, a little descent and the last climb up to the Neasmith’s house, while step, was done on foot as both Mr and Mrs Neasmith (my friend Adam’s parents) came down to great me halfway.

Seeing them again after many years was great and I thought they had not changed at all. We briefly met in 2005 in London, Tarn was there too, but the last time we spent any real time together was as far back as the last millennium (1999), when I was last in New Zealand..

On the way to their place I picked up some food for the road and a two bottles of wine which will provide a perfect accompaniment to a couple of evening of catching up.

I bought some dried meat and some canned food, I am thinking of dropping with them the stove the pans and the fuel as I have not used them yet, I am quite happy to eat cold food when I camp and if I want some hot food I can have it somewhere at lunch.

Before I was going to sit down with the Neasmith for a proper catchup there was something else I had to do. Roger, the ex director of IT at the University of Westminster is in town as part of a three weeks visit of the North island. Him and his wife built around a visit to a friend that moved here in the early ninety a three weeks tour of the country and as we’re from the same side of the world and we are both on the same bit at the other side of it it made sense to have a couple of celebratory beers.

The afternoon flew fast in conversation about past present and future. My trip seems to be a source of interest for most of the people but luckily the conversation did not centre completely on it. It was fun and I am sure Roger will have a whale of a time traveling through the north island, I could even bet that, before long, he’ll be back to do the south one too.

Back with the Neasmith the evening was good fun and we chatted till somewhere past nine when I really felt tiredness coming over me. I excused myself and went to bed, I truly slept like a log. Sleeping in a tent in the middle of nowhere has its fascination  but it’s a fascination that is beaten hands down by a comfortable real bed. Nonetheless the tent will have a place in my future for a long time to come and I have to admit that, as I get used to it, I resent the comfort issues less and less.

Refreshed as I was this morning I headed into town  on the Days Bay Ferry. The passage was a bit choppy but it allowed me to take some nice pictures.

The reason of the trip to Wellington was shopping. Recent experience with the weather and conversations I had with various locals have convinced me that it will be impossible to get through the south island west coast without having to deal with rain. I have junked the yellow waterproof jacket I had in the first leg of the trip and I think it’s high time I get a replacement. On top of that my inflatable pillow died two nights ago and that needs replacing too.

Shopping done, after visiting twice both MacPack and Katmandou, I headed down to the seafront where there was Dragon Boat racing going on. I paused for a while wondering the ethical ramification of a middle aged man looking and photographing young ladies in pursuit of athletic excellence, but I did not let that thought deter me too much, my soul is pure and I was watching just for the love of the sport.

The Wellington seafront has amongst its other attraction the availability of free WiFi so I took the opportunity for doing a bit of research on follow on cycling. I believe it will take me another 15/17 cycling days to get to Queenstown and probably the same to come back up to the top of the south island. Adding in pauses, visits to people and possibly a longer rest in Queenstown I reckon it will not be earlier than Easter before I get back on this side of the straight.

Naturally this could be a bit more if I decide to do the “RYA Competent Crew” course in Nelson, we’ll see, it will largely depend on the weather, if it’s iffy I might just decide to do it up north where summer will last just that bit longer.

On the way back from town the sea was even choppier but I had no problems with it, good omen for the sailing days. When I landed I walked from the ferry terminal to the Neasmith’s as I wanted to take pictures of something that had always and is still intriguing me, the houses and how they build them in this part of the world.

The hills are really steep around here but this is not stopping the sectioning of the land for house construction. The light nature of the wood houses I assume gives them more leeway in terms of the anchoring of the property, what would worry me is that this is a fairly seismically active part of the world and what if the big one hits? 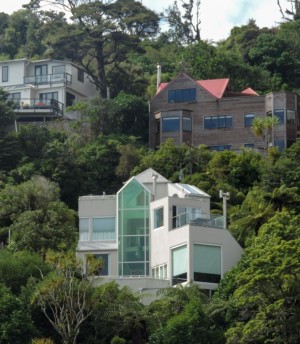 One of the advantages of building in such extreme conditions is that it is really easy to obtain the greatest of views and it is really difficult for a neighbour to build in a way that disturbs it.

Finally the fact that the sections (this is how they call the plots here) are very individual in terms of inclination and shape means that the building built on them are very individual and this area does not suffer from the “lemming town” syndrome affecting many places in the UK.

On the whole I like it even if it’s a rather bicycle unfriendly environment.

The other thing that I took some pictures of are fern trees. They have a special place in my imagination as I was introduced to their existence when I was young and I read a book about the earth evolution that my mum got me through her book club subscription. I remember that the book, while describing the various forms of dinosaur, that where really what I was interested in, also talked the forest being made up primarily of fern trees.

I had not seen one before I came to New Zealand, here they seem to grow everywhere.

Tomorrow (Sunday) I will be finishing off my research on the route forward, book all relevant transportation and relax. On Monday a whole new world awaits me.