Some clouds have a silver lining.

It looked like the carefully hatched plan was not going to pay off. When I woke up there was a distinct lack of brilliant sunshine. I set off anyway as there was little or no point in spending another day in Harihari.

Not five miles from town I caught the first sign of wha was going to be the theme of the day, the Southern Alps.

The morning weather was just a bit annoying. It was rainng but not with any conviction, not enough to get fully cladded but to much not to do anything about it. Luckily I had the Katmandu “in between” rain gear and it did the trick for a while. The problem with rain and cycle-touring is that if you don’t cover you get wet with rain, if you cover you get wet with sweat. Tough call!

As I said it did not rain too long, just enough to give me the chance to the picture below.

I’m not much for afterlife thinking, too materialistic I guess, but Tarn used to tell me that she did believe in life after death. She used to say that the soul of dead people lived on clouds and just sat there dangling their feet watching over the events down below. Well this one would have been a wonderful sight from any of the many clouds there were around.

The road today was very much divided in two halves. The first 40 miles to Franz Josef Glacier were easy with only one minor climb around Mount Hercules. The second 15 miles between Franz Josef and Fox Glacier which is a testing set of successive hills which pound you mercilessly till you’re left with little or no legs.

The first part, it goes without saying, went fast and allowed for quite a bit of photographic endeavour. What mostly was attracting my attention today was the mountains and how, despite the relative lack of height and the high temperature in the valley were covered in snow and indeed in some case by what looked like permanent snow. 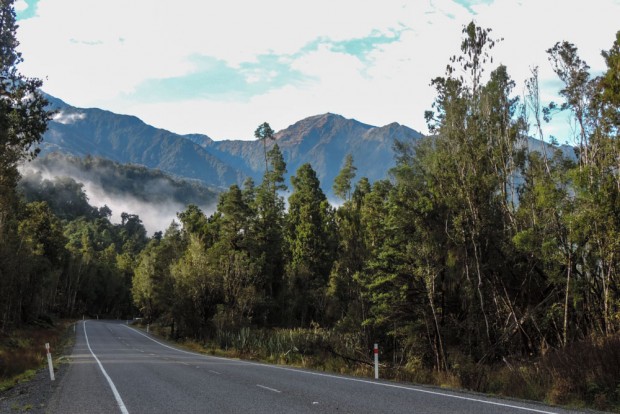 As I moved along I got to the perfect shooting spot, just before the SH6 crosses the Whataroa River, and indeed the first glacier I saw today.

Kiwi get really quite competitive when it comes to mountain talk, mostly with the British, mentioning that their mountains dwarf the mountains on the British isles. Of course What they do not mention, and I wonder how many of them have thought about it, is that Britain is almost right in the middle of a continental plate and therefore has mountains that have gone nowhere but down, due to the grating of successive ice ages. On the other hand New Zealand is a highly active place and the Southern Alps, for example, are still growing some 10 mm per year and this compensates the natural wearing.

The other cool thing is the melt water colour. It turns out this colour is peculiar of water that comes off glaciers as it contains what’s known as “rock flour” coming from the slow and inexorable grinding of the rock by the gliding glacier.

After some more time stopping and staring at the majesty of it all I set sail again, there was after all a long way still to go and the spectre of the last 15 miles hung over me.

I was making good progress and, also thanks to the fact that I left just after 8:00,  I got to Franz Josef Glacier just after 12:00. I passed a small industrial district with some houses and a motel then there were woodlands and a side spot where I could take a picture of the bike with the glacier in the background.

For a moment I thought that that was it. It did not make sense though, I had red that Franz Josef Glacier, or just Franz to the local was a bit of a hub for crazy stuff. I even though of bringing forward the parachute jump as they do a 18,000 feet one here and only 15,000 feet one in Queenstown.

What happened was that turning the following corner exposed the centre of town where there appeared to be an helicopter landing as another one took off. I stopped on that little place on the right and had a coffee and two cookies to carb up for the forthcoming slaughter. While sitting I got chatting with a German girl and her Scottish partner, here for a few years and in the process of opening a eco-pacifist lodge for people that like to go on holiday and grow their own food. Good luck to them, not sure that the kind of people that come here to climb, raft and parachute jump are the right crowd for that kind of business, but I’ve known to be wrong before, once or twice, many years ago, and it was a misunderstanding anyway.

After coffee and a distinct dose of self encouragement I picked up the bike. Enough time, getting out of town for a couple more pictures of the glacier and then up up up we go.

The first of the three hills came and went, the descent to the start of the second was brief. The second hill was long but steady and I got in eyeshot of the top before I needed a pit stop for water.

The descent here was longer and, given that there were little or no cars around, I could use the whole road to increase the cornering speed. I think in bits I was going over 40 MpH.

When I got to the start of the third and final hill I took a few pictures just to rest a bit. The ascent of the third hill started with a double hairpin with cattle grids at each exit. The inclination was furious and I had to stop every 1/2 mile just to catch my breath.

When I was almost at the top, after a fruit break and two water breaks I got overtaken by an lady who looked older than me and had gapped her husband by at least 400 yards. I grabbed my pride with both hands and restarted, getting to the top just after her and well before him.

In the quick ensuing conversation I discovered they were Swiss, from Interlaken, and doing a riding holiday where a group of them had a support van moving their suitcases between stages. I did not say it but I thought: “now that’s cheating!!!”.

All tat was left was a two mile crazy descent in Fox Glacier and in no time I was set up and showered in the Top10 Holiday Park. This is the first time I use this chain of campsites but the first impression is very good, I even got a loyalty card @ $49 that will give me 10% off to all the other ones I’ll use and to some in Australia too.

Tomorrow morning I’m going to Lake Matheson which, on a good day, reflects the mountains and is just magic, whereas tomorrow morning will probably just reflect low lying clouds. Then I’ll cycle to the bottom of the Fox Glacier exiting the town before riding the short 40 miles to the DOC site at Lake Paringa. Only 5 days to Queenstown now.