The day after the two days before.

How fickle can memory be that I did not remember how I suffered with my legs when I started in October and how better I felt any time I took a rest and recuperated. Starting this morning was splendid, the legs did not hurt and I was wise enough to put some fuel into myself before leaving Rotorua.

The sun was shining and most of the way to the hilltop was in the middle of a thick pine forest. I did not think there was much scope for pictures, apart from the sign-spotting thing that is now taking over my life, so I decided to take out the GoPro. Heeek! no battery, well done dude! It is charged now so I will commence tomorrow the filming for what will have to be a long New Zealand video.

I almost accidentally took a detour, and ended up on what I was told is the only cycle path in the whole of New Zealand. I’m sure they mean the only manicured one as there are plenty of trails on the internet and I’m hoping to do one or two in the south island.

The detour did not add much to the journey and exposed me to some of the landscape seen in the Lord of the Rings. Hobbiton, unlike most of the other locations of the movies is actually in the north island and it turns out I missed an opportunity to visit it while I was spitting blood climbing to Mamaku.

It is true though that the greener pastures of this part of the country chime better with the idillic town of the little people.

The plan for today was to take it easier and to only do something shy of 40 miles. I had planned to free camp near a river, after abandoning a lakeside location once I discovered it was an acid lake.

As I said before and today WhatAPPed to a friend though, we only make plans so that we have something to amend.

I clocked 25 miles at 11:30 and that would have meant stopping just after lunchtime, that was not reasonable. I decided to stop in Resporoa where the Fruit Market (main shop) has changed remarkably little since the streetview picture was taken in 2006. I had an Ice Cream and a bottle of apple juice and admired what was making the news down here for a while.

I left after 20 minutes of relaxation and proceeded to cover the remaining 13 miles to the projected stop for the day in a little more than an hour. I carried on.

Another short  13 miles and I was in Taupo. I did not realise that Toupo Bungy was on my route into town. I stopped for a coffee and to look at some crazy people jumping off the same platform that saw my jump nearly 16 years ago to the day.

It’s still as scary as I remembered it. 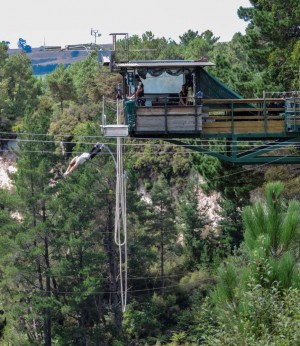 After that I rode down to the town centre searching for a bike shop. My wheel felt a bit soft and I thought it was the handling on the trip. It turns out it was jus the righting of the first few hundred miles of the new spokes, $10 and a nice conversation later I was on my way to lake front with both wheels now true.

Of course the choice of the lake front route was not the wisest as the camping was up a side road, probably 200 feet up. I got to the Reception with little breath left but I had made it, 54 miles and more than 2000 feet ascent for the day.