And out of nowhere I was entertained for a whole hour.

Where to start? Perhaps the beginning. I got up earlier than I expected and I saw off Rei and Yael. David, my wonderful couch surfing host, took them to the airport. I did all the preparation, had the two eggs the chickens round the back laid yesterday and cleaned up the room and the kitchen before I left.

On the way to the state highway I so a field of lambs so, after thinking that I probably ate one of their ancestors, I resolved that no trip to New Zealand could be called complete without a sheep shot.

Not many miles had gone when I entered into a village, Turakina, which flew Scottish flags. How bizarre, where they for me? Turns out not, shocking ah! It’s just that the descendant of the Scottish settlers still live there and every January they organise Highland Games.

I guess they forgot to take them down. Of course there is a strong Scottish feel about all places in town.

Moving on and in another few miles, to be precise when I hit mile 23, I decided to stop for some food as it was getting to that time in the day where the sugar levels drop and the peddling becomes more hard work.

I thought nothing of it when I saw the shop below other than it was funny and worth a picture. Then, as I was getting into the main shop area I remembered that the place was called Bulls and there was a reason behind all the strange stuff I was seeing.

If you look on Wikipedia you find a short account of Bulls and its strange goings  but it’s enough to say that these people have made a little thing go a very long way.

Which made me remember conversations had back in Italy about how the country could thrive if all the wonderful natural and artistic treasures there are to be found were put to the best use. I suspect that if the people of Bulls had a Michelangelo’s David or the leaning tower of Pisa they would extract every single possible benefit from them. 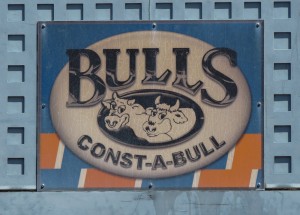 Second breakfast was lovely too, in the shape of a steak and egg burger. It was washed down with 750ml of Gatorade and, while both individually had been chosen with a precise cycling purpose in mind, the combination left me a bit full and the first few miles after restart were inred-i-bull, and not in a good way.

All said and done I made the campsite in Foxton Beach at 15:30 in just over four hours of saddle time so I cannot complain too much. 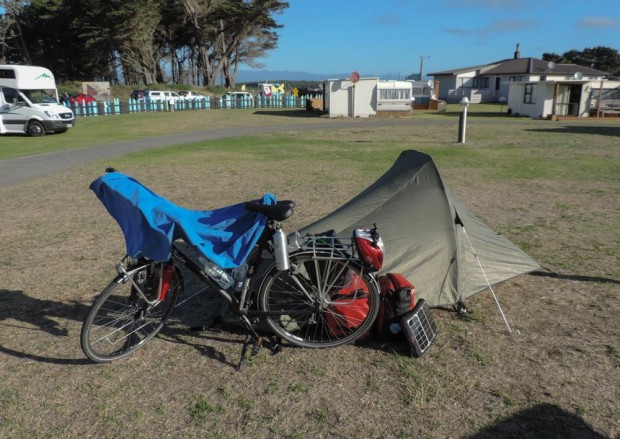 The campsite is good but I have not socialised at all, my neighbours are an older bloke in a tent on one side and two german girls in a van on the other. The bloke does not say a word, the girls yap non stop, I will not be surprised if they spoke while they sleep.

After the camp was set up I took a little walk to the beach, a mile there and a mile back by my reckoning, but I got some nice shots of the sea and the sand. I suspect there are much more spectacular sea pictures to be taken both in the south island and whenI eventually make it to the top of the north island.

Still it is fun to just try to obtain strange lighting effect and then go over them with Lightroom and see how much you can stretch reality before it gets silly.

The experience at the beach was a bit underwhelming, the path there was covered with signs saying “the beach is a road” and when I got there, right enough, there were several four wheel drive cars going up and down it. It rather spoiled the beauty of it.

I have rearranged tomorrow stage and added a few miles to make it to a nice campsite. I have, thanks to Yael, discovered the wonder of Campermate, a smartphone app that points all the campsites in New Zealand. I suspect I will be stuck to it for the rest of the trip.