And the trip on the water was so much better this time. Non of the drama of the way over to Ireland and that much quicker too.

Got into Troon late in the afternoon and made my way up to Glasgow and then over to Fintry where I was going to spend a couple of days Jayne and, as it turn out, take part in the celebration of her imminent emigration to England. 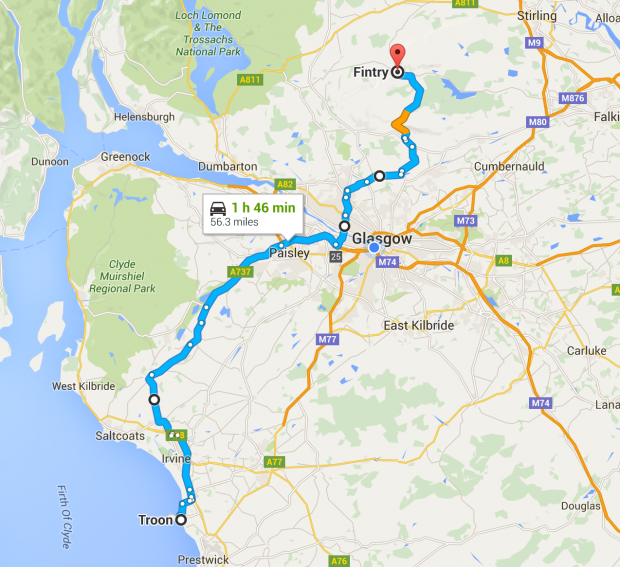 Weather is still good in September, as it turns out, it is much better than it has been all through July and August and I manage to get down to town to get some traveling kit I had eyed up last time I was around.

In the meantime I stop to get a coffee in a pretty special place where Irn Bru art rules. 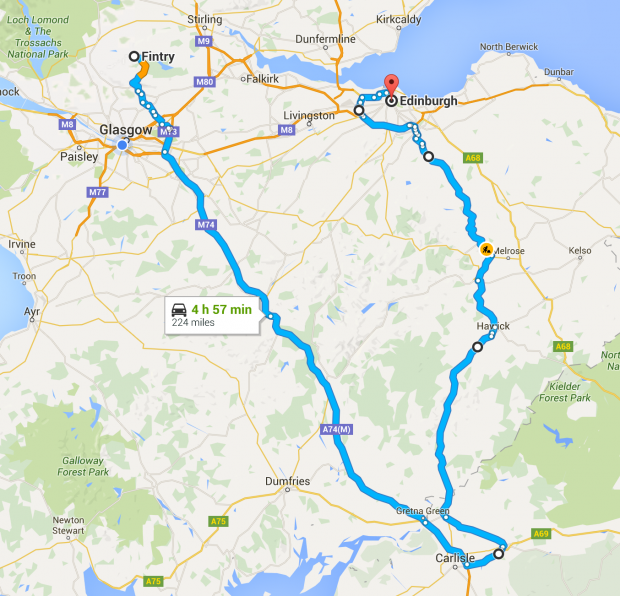 The A7 from Carlisle to Edinburgh is a splendid ride. I was lucky and the weather was on my side. It cuts across the Borders and goes through some of the most picturesque villages and towns in southern Scotland.

Curiously I was going through this area, and in many places I was riding next to, the newly reopened Borders rail line. For the less fortunate that do not own two wheels, arguably the ultimate exploring tool, I think this line would be a good substitute.

The visit to Edinburgh had the twin objective to see friends and to go for a wonder around the auld patch at exactly 20 years of distance from when I originally moved there, permanently leaving Italy.

I dramatically underestimated how painful an experience walking around the centre of Edinburgh could be. All the great memories that I have of those years surfaced and unfortunately they could not but underscore the sense of loss that I feel every day.

While on the west Coast I took the opportunity to catch up with Michael, this time I went over the bridge and to the Kingdom of Fife where he has his studio.

Weather not with me on the day but pictures were interesting nonetheless.

Last thing to do before leaving Edinburgh was to take a picture of a contraption I saw in a window of a computer shop a couple of days before. It turns out the chap was also in the papers a few days later.

Heading back to Glasgow I sort of took the scenic route and got to visit two sites I’d heard a lot about but that I had never managed to get to: the Kelpies and the Falkirk Wheel.

Because of the almost perfect balance in weight of the two arms moving around the energy required to rotate the wheel is the equivalent of boiling 8 kettles of water. #AmazingFact

Once in Glasgow of course an unexpected thing happened. I had for some time been thinking that I was going to get myself a pad in the UK again and I decided to have a look at one bed flat that had come on the market in a building that I always liked. Well, to cut a story short, I bought a flat. More on this to follow…