It was a wise idea to stop in Rotorua for two nights, this morning I woke up and my legs felt already much better. I guess I have had enough time to forget how hard it was starting the other time round, and then I probably had much more “first timer” excitement.

I caught up with friends and family before they went to bed on the other side, then I proceeded to do the first of the major rejigging of the panniers for this trip. It turns out that when you camp, your storage needs change very substantially, and things you were able to keep at the bottom of bags are now to be put in easy reach.

That did not take long and by 9:00 I was off to do a bit of exploring. I read a bit last night and discovered that there would be activities in this area to occupy a family for a fortnight holiday. I had however no appetite for that, preferring a stroll in the thermal park to helicopter rides or volcano explorations.

I set therefore off for the Kuirau Park where there are several hot pools and bubbling mud lakes. It was all very impressive and reminiscent, in a grander way, of things I had already seen both in Modena and in the south of Italy. The concept of the earth producing heat and spitting vapour and gas must have been quite astonishing to civilisations of old. It is no coincidence, in my opinion that both judaic and non judaic mythologies spare a place in their lore for a place below,  a place with fire and pain, from which sulphuric fumes are produced.

In the middle of the park there was a hot paddling pool and I resisted the temptation of stopping and dipping my feet out of fear of relaxing too much and falling asleep. I continued instead going around and taking pictures and short videos. The disappointing thing is that the photographs don’t really convey the awesomeness of the sight and the videos did not come out all that well. Never mind, you’ll just have to come and see for yourself.

After the park I continued walking to the lake shore where I had a coffee and some chips. Strange combination yes, but it was almost lunch time and I thought of catching two birds with one stone. Talking of birds, I made the incredibly stupid mistake to throw a chip to a seagull and in a blink of an eye I was surrounded by birds, worse than in the Hitchcock movie.

I was sitting in the shade and, shock horror, it was getting cold, so I decided to wonder back and go buy a bungee cord that I need to complete the panniers realignment. Unfortunately on the way to the hardware store there was a branch of Katmandu, a local outdoor shop that I have to admit I have become a little addicted to. Despite I remember very well all the pain I got for packing the original folding stool, and indeed the fact that I was made to drop it pretty early in the last part of the trip, I have to confess that my life has not been the same since. Now that I’m camping more consistently, I think it is time to give it another try to the idea, especially as this new one is not just light, it’s ultralight. I also looked at an inflatable armchair but it weighted like four ultralight stools so I did not get it. 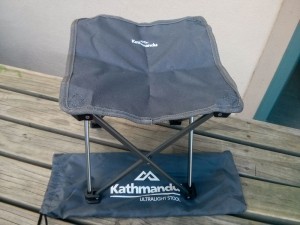 I finally got to the last few pages of the book I started in Biarritz (Kerouak’s On the road), I will finish it tonight. I realise that three months for a book is rather a long time but conspiring agains it there were all those days spent in Spain and Marocco with Internet on tap and the Christmas holidays with all sorts of other things to do all the time.

The reason I mention it is that I think I will leave it somewhere when I finish it with a note for the next owners to let me know where they are going to leave it when they are finished with it. I think it would be fun to follow over time the meanderings of the book from owner to owner, from country to country.

In one of the pages I also found the little song below and I stopped and stared at it for a while for it encapsulates a little bit how I feel about what I’m doing when I don’t feel so good about it.

Being alone is tough, being alone after having had a person in your life that made you feel together even when the two of you were at opposite ends of the world sometimes is truly unbearable.