Life fills you with expectations and then it dashes them one by one.

Good evening, good night and good morning. After i finished all the posting yesterday I had quite a bit of time to fill and I finally managed to take out the ukulele. The good news is that I still remember which way around one holds it, the bad news is that I’m even crappier than last time I held it.

It’s all right, I’ll get back to “average crap player” in no time and then it will be a long slog to “not just crap player”.

I was very refreshed and calm this morning, undoubtedly helped along by the lack of clouds n the horizon. It is remarkable how little it takes for me now to swing from total despair to fine and dandy. I wonder if there is a pathology hidden in there. A sign of the feeling good was that instead of thinking about busses, train, cook island, rental cars and anything else leading to the dark side of surrender and underachievement I was thinking about the ride ahead, the ride in Australia and where will I go next after the summer in Europe.

With this spring in the step I set sail for the short stage of today. As a matter of fact I have decided that the stages from here on will all be a bit shorter and I will just enjoy the afternoon a little more off the saddle.

Today I was going to Punakaiki, the world famous home of the pancake rocks, ok then just New Zealand famous, I myself heard about it three days ago.

The road was not very costal to start with but it was very enjoyable and I took my time, both not pushing it too much on the pedals and in stopping to take pictures.

13 miles into the trip and a bit more than a hour since I left I stopped for something to eat. Lovely spot with a small view of the sea and a wealth of healthy food to avoid in order to get to the real good stuff.

It was still evening in Europe so I managed to catch up with my sister who gave me a quick update on my dad’s condition. He has had fever for a few days but he looks like he’s on the mend. Chemotherapy truly takes it out of people, I saw it with my mother in law and now with my dad.

A few clouds were gathering after breakfast but nothing to be worried about. I knew that the place I am staying tonight is on the beach so I thought that some clouds at the horison if timed well could lend me the sunset to die for.

One of the things that is different when you know what you’re doing, you know where you’re going to stay at night and the distance you cover is not great, is that you can detour and explore things that you otherwise would just run past. This was the case with the Fox River bridge.

The funny thing with this bit of exploration was that the little path that after the bridge takes you back to the normal road is sealed shut with a guard rail. This is not a problem for people that have done the bridge on foot, it’s a bit of a nuisance for me and the bike. In the end, rather than doing the bridge again, I took some weight off the bike and forcefully lifted the rest over the guardrail.

It was shortly after that that the road met the sea more consistently giving me, for the last 8 miles of the day plenty of seascape picture opportunities.

As I got near the top of the last hill of the day, with only 2 miles to go to Punakaiki, I stopped for a couple of pictures and when I turned around I realised I had acquired a tail. When he made it to my spot the chap stopped, cyclist always welcome an opportunity for stopping on a hill. We did not exchanged names but we had a good conversation, I could easily pin him to Germany but he said he could not figure out from the accent where I was from. After all those explanations were out of the way we moved to talking about bikes, in particular of his Rohloff SpeedHub. I asked a few questions and he seemed to be happy with it. A few miles before, while I was thinking about my next custom built bike I was in fact contemplating the possibility of having a Rohloff SpeedHub in it.

He also told me he was in New Zealand for only 4 weeks and had to get to Christchurch by the 9 of March to fly back home. He started the ride in Auckland a few weeks ago, but he went to the Coromandel peninsula and the Bay of Plenty and that forced him to take a train from Waiouru to Wellington to save time and he’d have to take some public transport in a few days from wherever he gets too. I guess sometime I underestimate the luxury of time that I have.

I was getting closer and there it is. The typical rock formation that makes pinnacles look like pancake stacks. There is a better one just on the left of the hostel so I might take a picture later and add it up.

I got to the Punakaiki Beach Hostel in good time, got a camping spot, which really consisted of finding a free flat space in the garden, and set all up. After that I decided to go for the first swim in the see I have had this trip.

Wow, was the sea strange? First it was not as cold as I had expected, then the it did not slope away very quickly at all. The most interesting thing though was the northward current. The moment you got into deeper water it was a real struggle to stay lined with the hostel. If you were not careful in less than a minute you could find yourself a good 300 yards north, and I’m not sure but I thing also a bit further out in the bay.

Anyways I stayed in for a while thinking that this would do good to my legs too and then I exited and quickly went for a shower and changed not forgetting to put on my new best friend Bushman 80% DEET insect repellant. Yes there are things worse than mosquitoes here, sandflies!

Update: 19:32 I have now been for a little ride on the bike to get all the pictures I really wanted tonight and not have to do it in the morning, when it might rain. It is amazing how different is to ride without all the load, I felt like I could go 1000 miles an hour.

job, not too dissimilar from the shot I took from the beach front at the hostel.

On the way back I thought that the cliffs at the back of the hostel were deserving of a capture, but I am quite unhappy with the result. While it shows the inclination as well as the amazing vegetation growing on them, it just does not convey the towering effect that they have on the costal road and indeed on Punakaiki.

On the other side (south) of the hostel there is the cape that I think is really what the whole pancake thing is all about so that was my next destination for some pictures.

The featured image at the top is a result of the trip there as well as some less than exciting shots of the cape.

Update Some time later I with a few more people went to the rocks to take pictures of the sunset. It was promising a lot, with both strong sun and some clouds. This tends to be the best combination to get amazing spread of colour. The only snag is that the clouds need to leave a gap at the bottom end to let the sun light through to light them from below. This time it did not happen and it was not as amazing as it could have been. 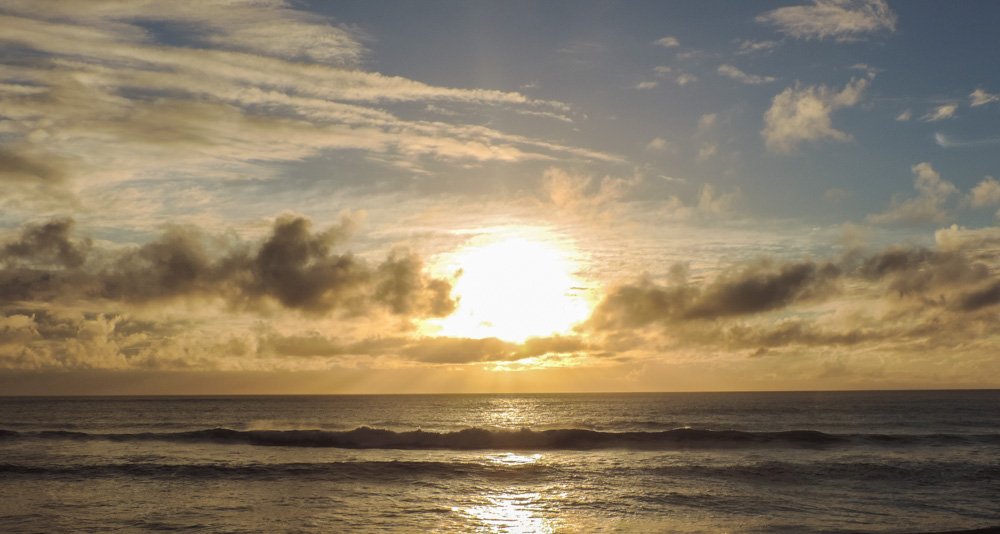 Better luck next time. Over and out.