Good morning Clyde, and let start the Otago Central Rail Trail.  Slept well and I was ready to roll, stopped at the convenience store and bought some food  and then I was on the road. The start of the trail is rather understated, in the middle of a residential part of Clyde.

Taken the right turn, the first time for a change, and crossed the highway the trail proper starts and right at the beginning of it there is Trail Journeys, a company that, amongst other things, offers support for riders that want to do the trail but without the aggravation of their own bike with their own stuff on it.

I went to see them and they gave me some water, which I forgot to fill at the camp and allowed me to use their compressor to check the tires. Nice people.

All ready and pumped up I got onto the trail. The first thing to point out is that the trail is built on the old rail track which got closed in the 1980s and decommissioned in the 1990s. The rough supporting gravel that was sitting the rail sleepers has been graded and gets continuous attention to make it usable by cyclists, hikers and horse riders. What however happens is that, given that the majority of the users are cyclists, two ruts form on either sides of it and, while it’s easy to ride in them, it is a bit dodgy to ride outside them.

The other thing they did when DOC redeveloped the trail was to repave the bridges so that there were no gaps on them. Unfortunately in most cases this has meant putting additional sleepers in between the existing sleepers and, due to the different age of the wood and the different shrinking rate, going on the bridges is a bit of a massage to the rear end.

Only a few miles between Clyde and Alexandra, If you’re interested in doing the trail I would almost suggest you avoid them. It’s flat and not particularly scenic.

From here the proper trail starts, with it the ascent that, given this was a rail line, is very gentle and never in the day did test my legs used, by now, to pretty severe abuse.

Along the route there are a lot of these small shelters, they all have boards inside them and they are not just been put there by the DOC when they redeveloped the trail, they are historic sheds that were there even at the time of the train line.

I was not more than a third of the way of a 42 miles day. It had taken more time that I expected, I suppose my experience of dirt roads is minimal so I am not sure my timing forecast are any good on this surface.

I got to Chatto Creek where the rail was on a bank and I decided to take an all encompassing picture, in the end I elected for avoiding adding the toilets in the picture as they were not really adding anything to the impression of the place.

Then I realised that the station was actually further ahead.

After Chatto Creek there is the only bit of trail that is actually climbing a bit steep. At the top of this stint you can, and I did, stop at the Tiger Hill Shed. I had a peach, that in the pannier was taking  a real beating due to the unsealed nature of the road, and an oat bar.

One word spent on oat and cereal bars in general. ACE! They are great, pack well, are relatively speaking healthy, and do not weight too much. I’m trying never to be without. I will also explore protein bars as a substitute to protein powder.

Not long after the pause I got to Omaku. The arrival threw me a little as, not one good with names and being the place I was stopping also a place starting with O, I had to check the map. Omakau had the feel of a city compared to the places I had seen so far, there was even a petrol station and a camping. I guess I had planned it differently I could have stopped here. 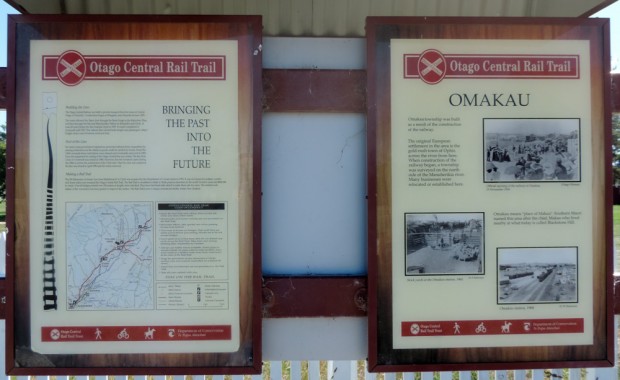 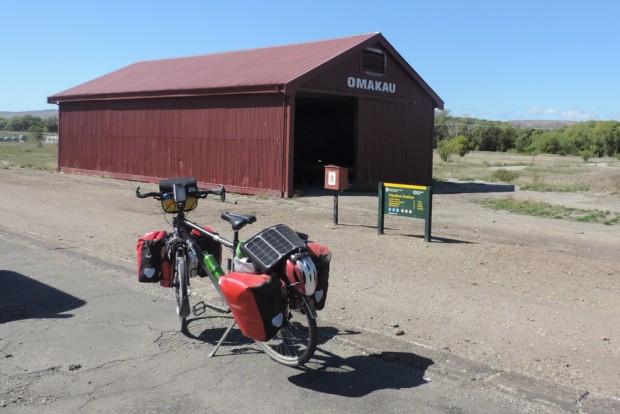 But I did push on. and I got all the way to Louder where the sight of the caffe right next to the trail was just irresistible. I stopped and I ordered a focaccia thing they had with bacon and egg and a coke. The lady at the counter said to sit outside and they’d bring the stuff in a minute. I replied “take your time, the more I wait the more I can stay off the saddle”.

After 10 minutes however I was starting to wonder if they had forgot about me, turn out they had as the lady came out and asked me if I had had the food already.  She was surprised I had not and she run screaming in the kitchen. The food arrived in a minute or so and was delicious, as a matter of fact, some of the egg ended up on my long suffering top so I’ll have to change cycling top tomorrow.

Lauder behind and after some climb I had the most excitement for the day. Two tunnels and two tall bridges. One of the bridges is in the head shot the other and the two tunnels were immortalised with the GoPro so when I get around to do some editing they will be added here.

Tunnel fun over it was a long stretch to the final destination for the day, but the view were stunning.

And finally Oturehua. This again is a very small place but it has a tavern where I now know they cook a mean ribeye steak. The beer is great too.

The camp is in the back garden of a very charming lady and she also has an outbuilding that gets used by backpackers, though I think we’re getting towards the end of the season for them.

After set up and a quick shower I went back to the pub where I did all my editing waiting for dinner.  As I was outside I run into one of the locals that was out for a cigaret and we started to talk. The town itself has arround 27 inhabitant and the wider area is almost 50. They have an incredible temperature range going to -22 in the winter and +45 in the summer, they also have Bonspiel, apparently the southmost in the world.

And they try to convince me that this is not Scotland?