Come closer and see, see into the trees …

Today is one of those days that starts with some expectations and finishes in a whole different way.

It was going to be a 21 miles ride to the Waipoua Visitor Centre in the middle of the Waipoua Forest and to start with it was a bit boring with a long and uninteresting rising road to the forest.

Once I got to the top though I was met by the most incredible scenery. It was raining, well heavy drizzle really, what you’d expect from a rainforest, but the trees were really dense and it made it feel like, had you gone more than 50 yards in you might have not been been able to come out again.

I stopped for a while and I changed my top which, partly thanks to the rain, was wet and therefore really unsuitable for the long descent that was in front of me. I had a drink and then I started going down. Unfortunately, due to the rain, the presence of sludge on the road and my awareness of how bad my tyres are in these conditions, I could not really let go completely but that was not a big problem as not 2 miles from the top I stopped to pay homage to the lord of the forest. 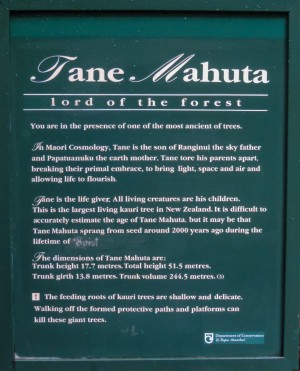 Tane Mahuta, board above and picture below is the oldest kauri left standing in New Zealand. At approximately 2000 years of age it was born at the time of the roman empire (someone thought the reference to christ in the board was not appropriate).

You cannot go close to it like you can with the ones I saw in Coromandel, but it is well impressive even form a distance. 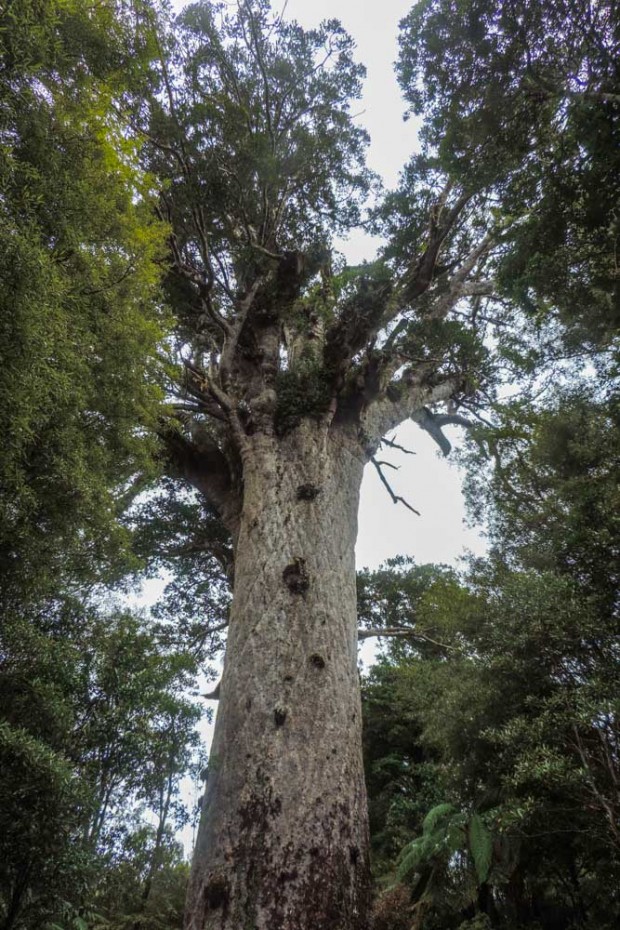 After spending some time in reflection I moved on and in 20 minutes or so I was at the Waipoua Visitors Centre and Campground where I had planned to spend the night. I thought that the visitor centre would have been more like a museum but in reality it was just a glorified gift shop with caffe. The campground was going to be $15 and it was raining so I was growing less keen

I did remember how the lady in the Haruru Falls camp told me that there was a place in the kauri coast where they did night walks in the forest to see kiwis so I webbed a bit and right enough, the Top 10 Holiday Park just 13 miles down the road was the place that organised them. I waited for the rain to stop and I set sail.

It took me an hour and a half to get to the camp as I took a scenic gravel road detour but I still had time to set up camp, have a shower, have some food and watch some tv before we left for the kiwi walk at 7:30.

See, the kiwis are nocturnal and come out an hour after dusk to feed and that is the best time to see them. There was 7 of us and the guide whom, armed with a big red torch was trying to spot them with all of us following on his tracks.

We walked in the forest, of the marked path, for nearly an hour and in the process we saw glow worms, giant crickets and an array of very old kauri trees (one more than 1300 years old), but no kiwi. We were all a bit dejected and decided to give it another 20 minutes and went back in the forest and finally not 20 metres away from us, we saw this massive female that was pecking at the ground. Funny birds they are, rather fat and inelegant, amazing that they are quite so revered.

Anyways at least now I can say I have seen a kiwi which means that the unicorn is back on his own in the zoo of imaginary animals.

The rerouting means that I will shave a day off my route by lengthening a bit tomorrow, but also allows me to stop next tot the kauri museum so I will get more info on these amazing trees.