Rolling with the tide, I thought I would be sleeping in a park I ended up in a different one.

Lazy start this morning, probably prompted by a feel of safety given by the extremely nice campsite. The availability of Wifi also delayed proceedings further as there is always a good reason to check the web a last time.

Being offset 12 or 13 hours from friends and family means that most of the networking is done at the edges of the day, first thing in your morning you see what I’ve done in the day that for me is just ending, first thing in my morning I get all your comments and interactions.

So at approximately 10:30 i eventually set sail and headed south along the east shore of Lake Taupo.

The cycle down the east side is quite easy, it leaves time for photography and today even for some GoPro action. The weather was perfect for it and the only thing I did wrong was not to put any sunscreen. Luckily it tuned out alright in the end and I am not burned beyond recognition.

As you cycle, I think I mentioned this before, you have  a great deal of time to think about the most unrelated things, sometime these thoughts are prompted by something you see . In the case of the picture below the thinking was about religion. I am not what you’d call a particularly religious person, but if I was I’d like my god to be happier with a church like this, than one of the ones I have seen in my countries, read Italy and Great Britain. 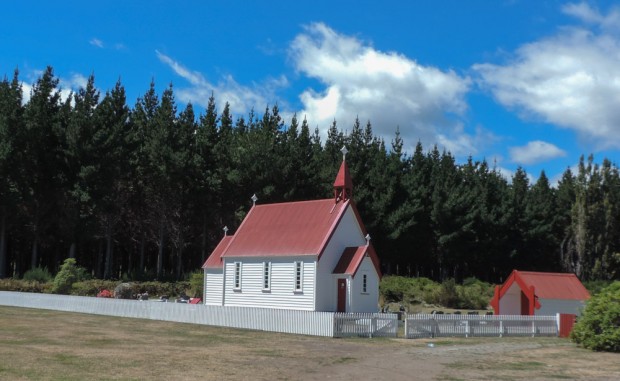 There is a honesty about this church, the simple nature of it talks of a desire to reach for the spirit rather than for the wallet.

Exhausted by such lofty thoughts I decided it was time to have lunch and I had so in a lovely spot by the lake that I knew very well. It is in fact near here that I spent nearly a week in 1999, last time I was in New Zealand hosted by by a lovely family that I hope I’ll be able to meet at some point in this trip.

As a small aside the ultralight stool was good, obviously it is a bit of a compromise as it does not come with back and arm rests, however it beats hands down sitting on the floor, or having to trail a tree log like I had to do in France.

After lunch I cycled the 6 miles to Turangi before I decided it was time for a coffee. I ended up stopping for almost 30 minutes and, as the Kerowak book was now finished, I wrote a note and left it on the table in the park. We’ll see if it will offer me some more entertainment as a social experiment than it offered as a piece of literature. 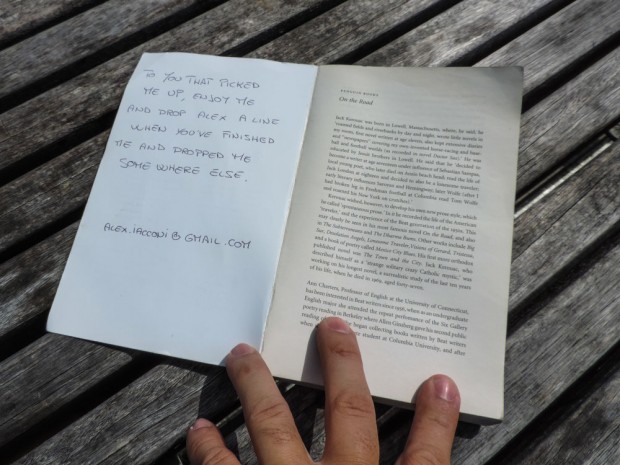 Just after Turangi the road starts to rise and the speed reduces dramatically, what was before a good 12 Miles per hour rate suddenly becomes 11 and the just above 10. Not a big problem though as I’m only more or less 6 miles from the planned destination.

Yes plans, again those things you make only to amend them. I had, stupidly forgotten to refill both my water canisters in Turangi so with just a can of water and a bottle of coke to last me to the other side of the Desert Road I was feeling pretty depressed. But fortune obviously must favour the idiots as I stumbled across a DOC campsite I was not aware of just 2 miles off my road. There would have been campers there and with campers, water.

Reception was poor at the intersection of the campsite road so I could not properly assess what kind of climbing problem I was going to get myself in, I took the plunge anyway and in the end the choice was vindicated by both a full water bottle and a pretty good evening meeting fellow campers from all over the place.

The DOC campsite is pretty tucked away and instead of being in the Tongariro National Park is in the neighbouring Kaimanawa Forest Park. When I got there there was only a camper of with a lovely couple that moved here from the UK in the fifties and another tent with a couple 1/2 Irish (him) 1/2 Chilean (her). I set up camp then we all gathered for a drink and a chat, all very nice really.

After that it was all back to their diners, in my case sardines from the tin with sliced bread and cheese, and to the daily processing and logging. 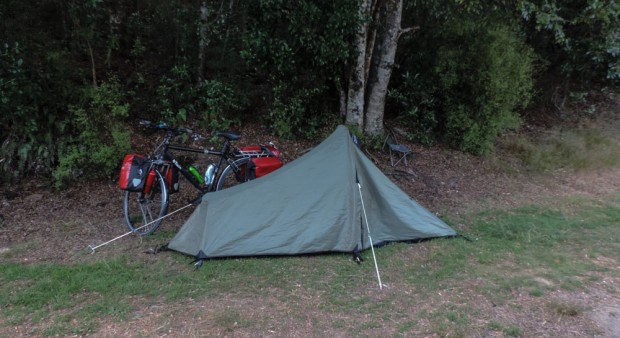 I am fairly tired now and I’ll go to sleep soon, I also just discovered that tomorrow I’ll probably be on the saddle for at least seven hours.

All things being good the couple of Germans that have, just now, pitched their tent right next to me will stop chewing bubblewrap and we will all be able to have a nice sleep.