Interesting day, I did what I set out to do, but I struggled. Today it was the temperature. It must have happened to you too, going out and thinking that what you’ve just heard Carole say is a load of bul*****.

Well, there is science behind it. The temperature we feel is a result of several different factors: wind speed and direction as well as humidity are some of them. This means that only looking at the headline figure can be dangerously misleading.

I was aware of what I was going into and yet I was surprised on how debilitating it was. This was not helped by the facts that by the time I had reached Ampudia [approx. 16 miles], where I had planned to have breakfast, I discovered that despite being a lovely place, it was very much a ghost town, with no open bar.

Feeling very cold in all extremities I kept going, strong in the knowledge that I had emergency rations in the bags.

Luck turned, from bad to to very bad a few miles later when I had the first puncture of the trip. I will have so many of those that I thought taking pictures was not necessary. As I go along I will surely find that things I once felt were news worthy are not, still, the first was worth at least a mention. Change was seamless and I will fix the tube tonight. 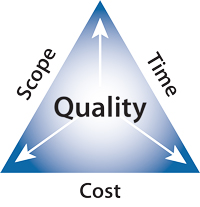 The critical thing was that the puncture happened at Valoria de Alcor. This rather unremarkable hamlet sits at the junction of two roads. The one I was aiming for, leading to Tordesillas and in another stage to Salamanca. The other led to Valladolid.

Now, you have to know that the worse angels are always busy busy and they get all sorts of allied support from the cold, rain, pain, sickness or just weak will. At that point I was fixing a puncture, fairly cold and staring at medium to bad weather forecast for tomorrow. I have to admit, the temptation to go to Valladolid and catch a train to Salamanca was strong.

Why did I not? Well, paradoxically the puncture gave me time to warm up a bit. Moreover I started thinking about what I do as if it was a project. In particular I created my project triangle where my constraints are the object of the exercise, i.e. cycling around the world, time, i.e. the time takes to do it, and survival, i.e health and general security. Why did this help? It helped as it told me what are the things I can/want be flexible on and what I’d rather not be flexible on. Obviously I cannot be flexible on survival, if nothing else it would have a catastrophic effect on the completion of the effort. I would like not to be too flexible on the object, if possible, I’d like to travel as little as possible not on my bicycle. I can however be very flexible with time, I have a whole life worth of it.

In the specific this thinking helped me in deciding to continue as plan and if necessary stay an extra night in Tordessillas if the weather is really awful tomorrow morning.

So here we come to the guilty pleasures. A guilty pleasure is something you enjoy knowing you not only should not, but it is, probably, contrary to most or all of your cherished beliefs. My eco credentials should be good or at least getting better as I am going across continents on a bicycle. I had however a moment of complete ecstasy as I came around a corner and saw a sea of wind turbines totally still. Not one was moving, there was no wind.

Castilla y Leon, the region I’m currently in, has impecable renewable credential. 70.8% of all electricity was already sourced from renewable in 2006. This is even more remarkable as the national average for that year just shy of 20%. Last year, in Spain wind alone was responsible for 23% of all energy needs.

Solar is also very visible and near Seville there is the first commercial solar concentration plant, look it up, It’s ipressive.

I guess sun and wind are reliable and, apart from today, fairly constant in the country so any investment can be done with a degree of assured return.

Going back to my day, I spent the rest of it pretty much in the company of myself until I decided that I was making good time so it was time to stop to do a bit of bike maintenance before turning into the hostel. I stopped in Torrelobaton, unpacked the bike and turned it upside down. The problem is one I have been carrying from Biarritz. The chaps at decathlon, while they rectified the lateral warp of the back wheel they returned to me slightly out of centre, in other words, slightly egg shaped. Naturally this was not terminal as it might sound, I have done 300+ miles on it after all, but I had meant to look into it and put my spokes key to some use for a couple of days. So I did and the problem is now a lot less severe.

While I was doing all this I attracted the attention of a local and we started to talk about the fixing of the wheel, the problems he had with the wheels of his bike, my trip and the nuisance of the fact that the electrician had told him he was going to be there at three and it was already almost four.

After I finished and I was in the process of repacking the bike he complemented me on the quality of my Castiliano. I thanked him and explained that, being Italian I had a leg up on learning it. I know that he was probably complimenting my effort rather than the actual spoken skills, I have done the same in Italy and in the UK with people trying hard to string words together. Nevertheless I liked it and, after all, we had a conversation which counts more in my book than grammatical perfection.