Another wet morning, followed by a sunny day.

I must have got more relaxed about the weather during this trip, or perhaps I’m more comfortable with my capabilities. This morning I had to stay in bed past 8:00 and then wait till 9:00 in the kitchen before I could decamp due to continuous rain. I was not even expecting it thinking that today the weather was going to be better.

When it stopped though it was glorious. I packed up and left before the situation changed, but this meant that the tent went in pretty wet.

I stopped a couple of miles north of the campsite to get a coffee and decided that, as well as taking a few pics it would be worth taking the tent out and dry it properly. The sun was out and in no more than ten minutes it was dry as a bone.

After that my mind was at rest and there was nothing to do other than cycling the remaining 44 miles to the “not quite Auckland” campsite.

The ride was really pleasant, it was a mix of light rain and good sunshine so I decided to wear the vest and to put on the rain coat in the wet patches.

There were not many of them but they were there and they reminded me that we are well and truly in autumn here. Mid April in the southern hemisphere is like mid October in the northern, so there is now not much difference from when I left Glasgow last fall. Well there is the difference that I’m more like at the height of Sevilla than Glasgow, but other than that detail it’s pretty similar.

I also stumbled upon something that might be a local fascination, novelty letterboxes. I have seen a few in the last week but today, going through Kawakawa Bay I saw three rather cool in the same row of houses.

After Kawakawa, which is another of those places so cool they had to name them twice, I found the only hill of the day. Quite fun to go through the very dense and green forest and, having just finished raining, to see the steam coming off the tarmac.

It is clear to me now why vegetation is so luxurious up here, it rains a lot. 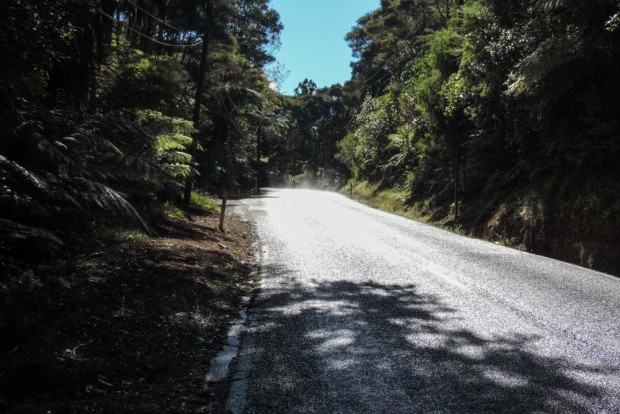 A rather longer spell of rain cam e when I was near Clevedon so I took the opportunity to eat something, the young lady at the bar told me there was no cook but she’d make toasties for me if that was ok, I would have eaten a reheated boot sole so I was delighted with tosties and a beer.

There were only 10 miles to do and it was just past 14:00 so I just relaxed and watched a few of the oldies music video that were running in the bar’s screen.

The last 10 miles flew by also because the change of direction meant the wind was now behind me. It had not been a great burden when I was riding into it, but it was a noticeable change and the speed picked up considerably.

The most noticeable things was planes overhead, circling to land at Auckland International, but also the traffic was visibly increasing.

Then I came up a hill and there it was, I’m not that far at all.

The campsite is very nice and, apart from the planes noise, also very quiet. I stroke a conversation with one of the rangers when I went to pay for the overnight stay and she told me she was from Scotland too, Fyfe to be precise, and she had moved here 13 years ago as she had had enough of the Scottish weather. I guess she had a point but I told her that if she ever felt homesick she just had to go to the south island and it would be like being back home.

As luck goes I seem to have almost run out, as I was getting ready to set up camp it started to rain so I had to stand in the toilet block for 10 minutes for the shower to finish, but when it did I had time to do all the setting up and have some food before it rained again.

I don’t think there is more rain in the cards for tonight or tomorrow, but, as I said, with my luck, there will probably be a monsoon in the middle of the night.