It was fun while it lasted.

Off we go, on the bike again and leaving Queenstown. It was a good break and I enjoyed what I did even if it was not completely what I planned to do.

Now it’s back to the day job and to more peddling through this great country. The route today included a large chunk of dirt track and that comes with its set of challenges and rewards, more about that later.

The path that comes out of Qeenstown and follows the Kawarau river starts very flat and is scenic, it is definitely something to keep in mind for all of you inclined to come to these parts. Rent a bike, cycle to the Edgar bridge and back, it makes an excellent day out.

The path runs along the river and you get wonderful views of the Remarkables as well as of the river itself.

There are quite a few people jogging to start with, but then they get replaced by people in mountain bikes and a few nomads like me.

It zigs zags a bit and in a spot or two you have to be sharp with picking the signs, but on the whole it is not difficult to follow and there are loads of fun things like, bridges and, well, more bridges.

As you get further south it has some hill side climbs that are a bit of a pain but they rise you up enough to take better pictures.

I however had some problems with the gravel, my Swable Marathon Plus are great on the sealed roads but they are not very good at handling unsealed roads. I had just tweeted Andrew about it when I got to a bit where, going down hill, I could neither drive the bike or break, I thought I was doomed, but I scraped through.

The prize for surviving  was getting the surprise of the day, Edgar Bridge. This is a suspension pedestrian bridge that takes a maximum of 20 people at the time.

It wobbles a lot and the vanity netting that constitutes the sides of the bridgr make it more scary to cross, than skydiving.

Getting on the other side though means also eventually crossing the SH6 and getting in the Gibbston valley.

This valey is famous for the vineyards that can be found in it and it is also a mighty nice cycling destination. The Queenstown Trail Extends along it all the way to Gibbston.

Not long from the Edgar bridge Kawarau Bridge Bungy, one of the many bungy places in the Queenstown area. The path actually goes on the bridge and I stopped to see some of the dare devils jump.

Past the bungy the valey keeps offering great sights and also the opportunity for some filming. Today it was not a lucky day on that front, I should have known better especially giving what I had found out about my grip earlier. I don’t want to spoil the surprise, just go through the 1 1/2 minutes video and then laugh, you have my permission.

After I recomposed myself, especially the runaway bit of hair, I continued on the tarmac road, I thought it was quite enough of gravel considering that I am going to have plenty of that in the next two days.

It was not long before I run into a convoy system, the guy at the front that was holding the queue let me pass and I had a good 3 minutes of the stretch of road for myself.  I probably should have not do it but I stopped and took a few pictures (below), now I realise they are not conveying the magnificence of the views.

The road was easy after that and I took it easy taking a picture every now end then but mostly taking in the landscape.  Following the river descent meant mostly downhill cycling and I felt a bit sorry for two young German ladies that I stopped to have a chat with who were coming from Cromwell to go to Queenstown. I tried to cheer them up by telling them that the pain was going to be worth it for the views.

i stopped at a lookout just inside Central Otago, the river was beautiful, but not any more or less than I’d seen before, what caught my attention was the pine tree that seemed to have lost their needles, I did not know they did that. 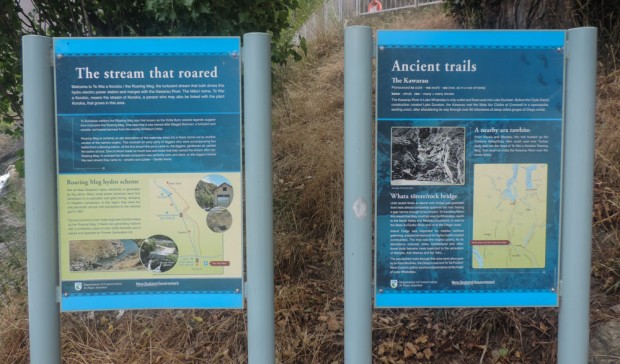 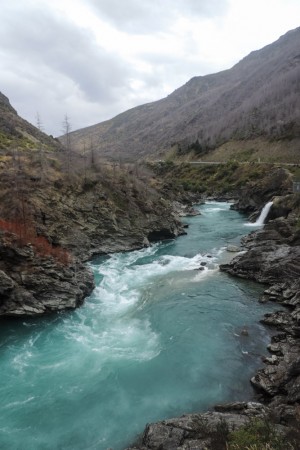 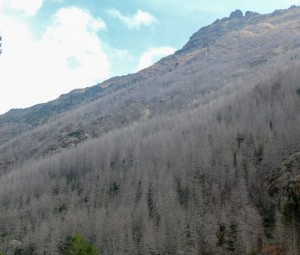 The last image in the Kawarau Gorge is one that was very evocative for me, I felt like at any time the fellowship of the ring would have come around the corner in their elvish boats on the way to Mordor.

That was the last of the gorge and then I got to the outskirts of Cromwell. I felt victim to a moment of madness and I purchased that I think was nearly two kilograms of fruit from the stall. This is only crazy as I have learned with experience that one should not over load the food store on a bike.

The fruit was very good though and I was just attracted by the whole honesty box thing.

Scottish theme continues in this area, Andrew had warned me. The picture of the flag is from the Highland motorsport circuit in Cromwell.

Fruit is obviously big business in Cromwell, in the couple of miles I was in its neighbourhood I saw juice places, dried fruit places as well as countless road side stalls.

After I got to Clyde and got cleaned and set up I went to the camp kitchen where I met Simon and Ann. They are an English couple that is doing what I am doing. They sold all in the UK and bought a static caravan that is their base when they are back there, other than that they will be cycling all over the world. Why? why not, better do it when you can than wait to get too old to doit they say. We exchanged contact details and I’ll probably swing by them next time I’m in the UK.