So, the time has come, Isabella is here and performing her acrobatics in the pool, I collected the RV and we’re off. Once we pick up Cristiano from the airport it’ll be directly north to Black Rock City.

It’s a long journey from Las Vega to Reno where we have to stop to pick up the stuff Isabella left last year after the burn. Essential stop though as we need the bicycles and other bits and pieces. On route I manage to sneak in a novelty stop too, we take the 93 to Crystal springs and then the 6 takes us to the Black Mailbox, the hub of extraterrestrial activity on earth.

The day is long and we get to Reno where we stay in a motel rather late. The trip would have been long but fine if the jinx (Cristiano) had not tempted faith in the town of Howthorn: “Things could not go better”, he says. Within 20 minutes we fail to get food in two different restaurants, we get stopped by the police for driving without lights, seatbelt (back passenger) and having the car not displaying the tax sticker, and eventually we get a crap sandwich from a filling station filled of characters that would have made the monks in The Name of The Rose look positively fetching.

None the less we get to Reno, we sleep a few hours, we load the bikes and the rest and just before midday we cross the entry gate of Black Rock City. We are at the Burning Man.

Now, not all of you know what the Burning Man is, I’ve been there and I’m still not completely sure I know. The more graphic description of it is: it’s a city in the desert that exists only for 10 days at the end of August where people congregate to express themselves and celebrate life in all its’ facets. I know it’s not a very enlightening description but it’s the best I can do.

Going to the Burning Man involves a set of steps: first you have to manage to get a ticket, they go on sale earlier in the year and they cost approx $430. I had various conversation with people about this and it appears to me that, despite the need for the money to set up a 70,000 people event, the ticket is a bit of an entry barrier which creates an environment where a segment of the population is cut out on financial basis.

Another step, not absolutely necessary, but that I would recommend, is to join a camp, there is a cost attached to it and you have to contribute some work but I think it’s worth. You can go and camp alone, but joining a camp not only cuts down on the amount of preparation necessary to survive a week in a rather inhospitable environment, but, most of all, provides you with a ready made platform of possible friends with whom explore the weird and wonderful world of Black Rock City.

Cristiano choice was inspired. We joined the Hee Bee Jee Bee Healers. The people in the camp were splendid. Dedicated to their mission and at the same time real fun to be around. The organisation was impeccable and when I go back I’ll definitely go back to them.

Work was not hard, Isabella and I were in the kitchen, no less than 2 and no more than 3 hours a day. Cristiano was in the infrastructure team, looking after stuff. When not working the time spent at Burning Man is employed exploring and joining into all that goes on in the city. There is no money, the whole place runs on mutual gifting. There are places that gift music, places that gift food, places that gift drinks, places that gift a space where activities can be performed and here the spectrum of activities very much includes the whole human lifecycle, with perhaps a strong emphasis on recreational reproductive rituals.

The second night we were there was new moon and Cristiano was set on achieving his dream of taking a picture of the centre of the galaxy without moon light interference. We cicled to the outer edge of the outer playa and he did his magic. I think the result was good, considering that he was fighting with a festival of light.

On the way back we took a few snaps of the art installations and art cars going around the playa. Light is a massive component of the festival that started around fire and fire eating shows.

Of course life goes on in his weird and wonderful way during the day too.

Unfortunately Isa got unwell, we don’t know why but we had to take a trip to the medical centre which proved another good opportunity for day pics.

Another rather cool thing that took place was a gift auction in which different camps were offering services in exchange for whatever people were willing to offer. some of our healer went and in exchange for a set of treatment and a meal they got a private concert from a David Bowie tribute band.

Thanks to the David Bowie tribute band we get to discover that there is a Prince tribute concert and we go to it via the playa and some more exploration of the structures that keep being built only to then be burned down.

We got to the Crossroad stage on time but the concert, in perfect Burning Man style was an hour late. Also, again in perfect BM style, the sound was interrupted quite a few times during the performance due to malfunctioning generators. Nothing quite works at Burning Man.

The group is a collective of über talented musicians and performers that comes together for Burning Man and gifts the playa with 4 performances. The one we saw was spectacular.

As the festival was drawing to a close events seemed to spring up from nowhere and improvised marched happened right past our camp. The air was getting livelier and at the same time there was a sense of come down as the week was ebbing away and the main burn was coming closer.

Someone told me that the meaning of it all, in particular the fire component, is the celebration of the impermanence of things, a gigantic carpe diem shouted to the sky in fire. Live the moment, nothing lasts.

It’s Saturday night, all the citizen of Black rock City congregate at the centre of the playa to see the man burn.

And then the burn starts. 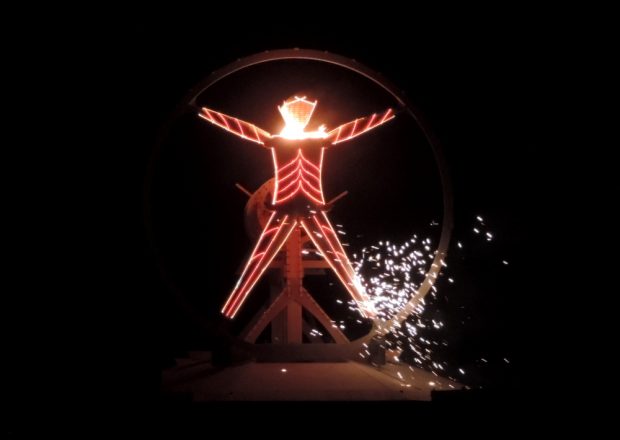 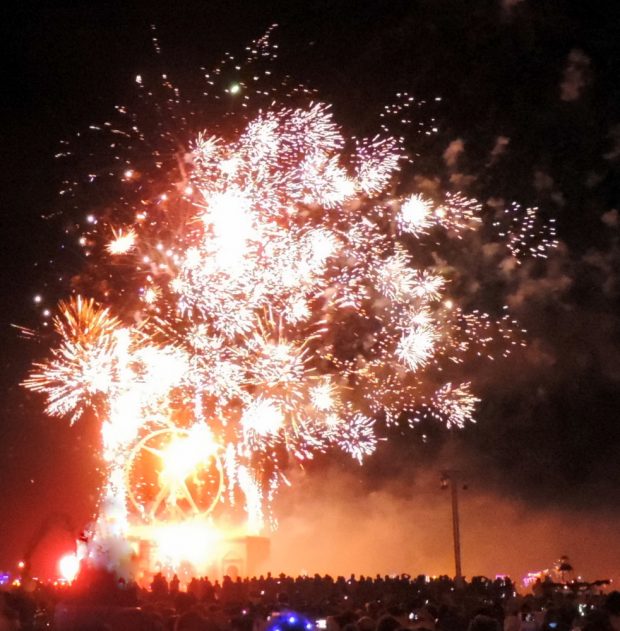 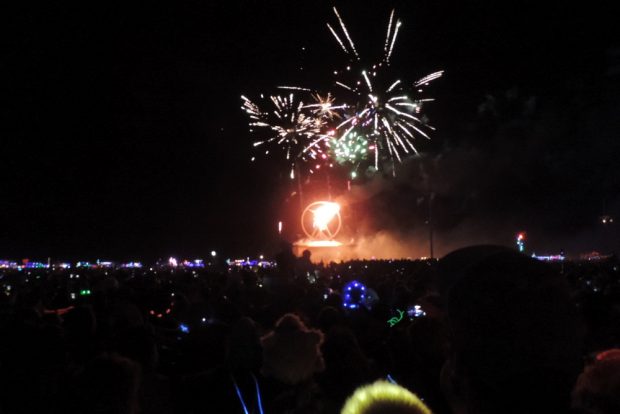 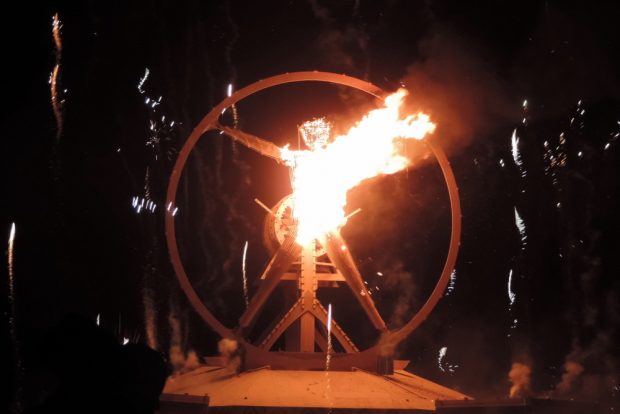 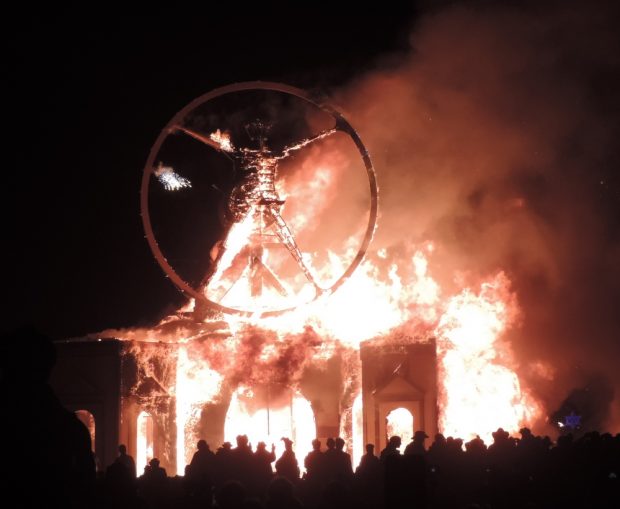 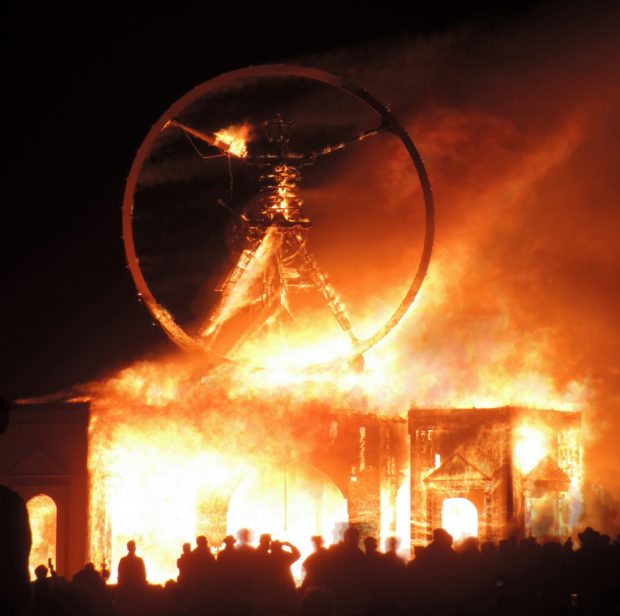 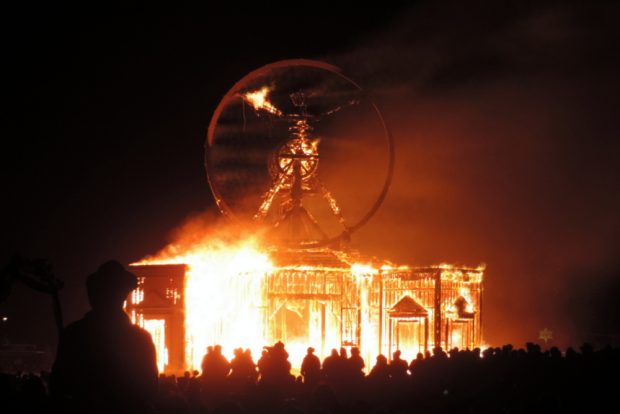 The only shitty thing about the burn was that there was a A-hole that stood up in front of any people, partially ruining the pictures that many wanted to take. There is always one. After the burn I returned to the camp giving a miss to the after burn EDM session Cri and Isa went to.

So, I loved it! I made a bunch of friends that, hopefully will see again, and made an experience that is unique in its kind. There are many inconsistencies in the place and there are many areas that I did not explore and probably will never explore, but I am really really glad I went.