Another border crossing and another opportunity to feel anxious. In the end, as usual, there are no problems and I, quite literally, sail through. The plan for the day is to get across from Victoria to Port Angeles, where my novelty twilight tour will start, then go to Neath Bay to learn more about the Pacific North West Native Americans, then, a stop in Forks, main vampire and werewolves centre and finally a stay in an hostel that promises a lot.

Port Angeles proves to be a bit anticlimactic, I decline to go on a proper look around town for the Twilight sites, I am approaching fifty after all. The weather is fair, if a little cold, and I head for Neath Bay.

When I get there I’m frozen stiff and I stop for some food before going to the Makah Museum. Billed to me as the Natives’ Pompeii, it did not fail to impress. I’m really enjoying the stuff I am learning about the First Nations of America, it’s not something I ever knew anything about and there is indeed a lot to learn. 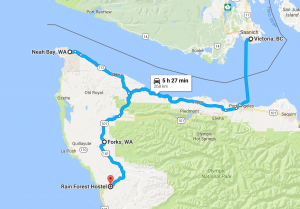 The next stop is Forks WA. the set for the Twilight book trilogy. These books and the movies that went with them have a special place in my heart, not so much for their content as for the fact that they remind me of a happier time when Tarn read them and our house was all about vampires an werewolves. By the end of them she confessed that she was a bit vampired out 🙂

In town I really only stopped to get a sticker for the bike and a slice of pie. Little I knew that instead of a slice I was going to get a quarter of a pie with ice cream and that would sort dinner.

I finally got to the Rainforest Hostel which is a rather basic and yet super welcoming establishment run by a lovely seventy something man from Brooklyn. We spent the night discussing politics, life and the universe, a most educational experience. At the Rainforest Hostel you pay what you can afford and you also have to do a chore a day, I run the vacuum cleaner. He is a big Bernie sanders supporter but now he’s campaigning for a Clinton presidency. 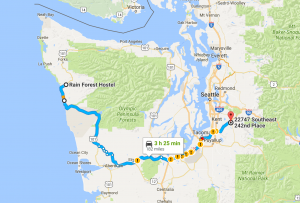 Another few hundred miles around the Olympian Forest and I got to Maple Valley and to my lovely hosts Janice and Jen Marie. I met them on a ferry ride to Ireland last year. That was a crossing from hell, the weather was all over the place, but at least I met them and seeing them again is a real treat.

Not planning to do much at the week end I ended up going to the home game of Jen’s school football team, climbed a local peek and generally had a great deal of fun. 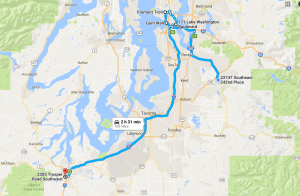 The next stop of the Washington State homestay tour is Olympia, which is the capital. As the way there from Maple Valley is not too long I decide to swing by Seattle and have a look at some alternative sights.

First on the list is Kurt Cobain house, that is the one where he took his life. It’s on the west shore of lake Washington and while it’s now just a private home, it remains a place of pilgrimage for the die hard fans. I do not consider myself one of them, but I was here, so… Next to the house there is a bench that has been turned in a sort of unofficial shrine, not sure how I would feel if they did it next to my house. Actually probably there was a bench next to my house but, given that I live on the south side of Glasgow, it might have been stolen.

Second stop is the Fermont Troll. I was told it was worth seeing and they were right. Also, being on the north side of the city it offers the possibility of crossing town as well as a few bridges.

Finally a stop downtown where within a short walk of 2nd Street The market and the Gum Wall can be seen. This is the hub of Seattle, not to far from here the first Starbucks opened.

Left Seattle it’s a quick ride to Olympia where I am going to stay a couple of nights with the family of two amazing kids I met down in New Zealand last year. Laura and David (parents) and Killian and Wren are super people. In the two days I was there we did art, had great conversations, saw salmons swimming up rivers and shared our common passion for a Trump defeat at the polls.

They also took me to their community workshop project where there  were all sort of interesting things going on. There I met a very interesting man that showed me his rail bikes, yes these are bikes that are designed to go on railways lines. Might that be the next project, perhaps the Transiberian route.

I love the people I spent time with and for sure both Seattle and Olympia are cool places but if I move from Scotland I’m not sure I’ll want to settle in a place with the same wet cold weather.