Out of the city and back in the wilderness of Canada. Vancouver was good but now it’s off to the Island and see if all the people that told me good things about it were right.

First thing, as I queue for the ferry, I meet this bunch of bikers that are going my same direction to pay a surprise birthday visit to a friend that runs a camping near Tofino. We ride together and have a great time but unfortunately I cannot get out of the camping booking I made in Tofino and so I do not stay with them for the party.

The ride is great fun though and, aside from loosing my backpack midway, lucky that one of them was behind me and picked it up, I really enjoyed both the tarmac part of the journey and the last 20 miles on the gravel road to the coast.

At the last village we stopped before the gravel road I had the really bad idea of buying a bottle of soda and, I now know, soda in the pannier and off road riding don’t go together that well. When I got to the campsite, under the rain, I realised that the soda bottle had broken and the tent, as well as my sleeping bag liner were soaked in soda. this made for a rather uncomfortable couple of nights of sleep and the problem was made worst by the fact that it is nearly impossible to get a fire going in a rainforest.

Well, who cares, camping is like this, you cannot always have cloudless skies and infinite sunshine.

Day two in Tofino was all about the sea. I wanted to go whales watching and the super helpful chap at Remote Passages suggested that instead of just whale watching I could go, for the same price, on the hotsprings and whale watching tour. I think they were trying to fill the boat.

The trip was sensational, not only we saw two different types of whales, but also seals, otters and dolphins. The hotspring were really good and to get to them I had to hike trough the dense temperate rainforest of Tofino making it a day in which I experienced pretty much all there is to experience in this part of the world.

The coolest thing is that I caught the grey whale doing a dive on camera, what I call the money shot. The humpback whale was in sleep mode so it did not move much, but it was still quite amazing to be this close to such massive animals. 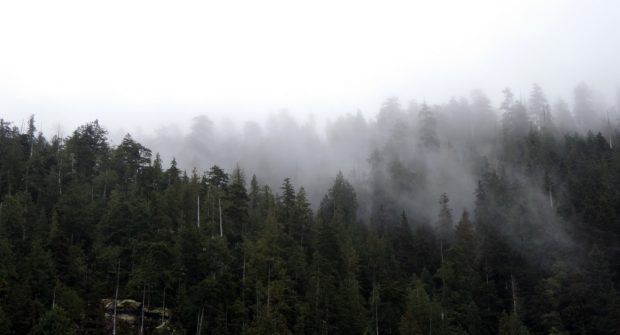 So Tofino gets a big thumbs up. Yes it was misty and wet most of the time but I guess this added to the experience, I say now.

Next stop is Victoria, British Columbia capital and the site where Prince William and Kate are currently visiting in their second Canadian tour. Will I get to see them? I wonder.

Victoria is by far the most Britain like city I have seen in Canada, the weather is good, mid to high twenties, and I go around both during the day and night. It’s not a massive place so I also take the opportunity to recharge the batteries with a bit of internet movies and just relaxation. 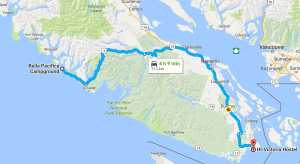 Victoria is probably the place in Canada that I preferred. It’s tough though, a bit like choosing among your children. \people though seem relaxed, and there is jazz in the street, no beggars and the food I had was really good. the last night I went to a Vietnamese restaurant and, as well as being really affordable, the food was very good.

It’s bye bye to Canada tomorrow, but I’m sure I’ll be back, I would say this first trip to Canada leaves me with only good  memories. Now it’s back to the USA