Washington State was intense, but in a good way, now I have a few days of long riding to get myself to san Francisco where I will see a lot of friends and hopefully have a blast.

To do that I have to cross the vast majority of Cascadia.

The first leg gets me into Oregon. Riding the 101 down was the plan and I follow it, but the weather finally shows it’s real face and I spend the best part of the day under the rain and not able to appreciate what might have been a splendid coastline.

Nevertheless I make it out of Washington and into Oregon.

Coos Bay is probably a very nice place, but wet and cold, I only see the inside of a motel room, for the first time in the trip I even order a take away pizza and spend the night watching the new Star Trek movie.

Luckily the rain has gone in the morning and I can do the next leg of the trip in a relatively warmer and more relaxed way. I get into California. 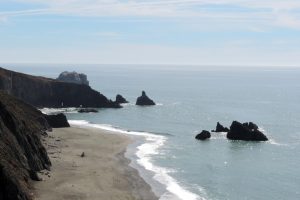 The south Oregon coast, as well as the north California coast is beautiful, I only stopped a few times to take pictures but I could have been parked all the time. It’s another 400 miles day, incredibly how I manage to put in these distances day in and day out.

In the morning I service the bike and get on the road again, the destination is Bolinas, a little town just outside San Francisco that I will come to love for all sort of reasons. 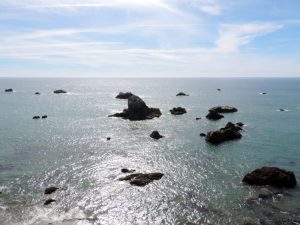 Bolinas in not actually on the American tectonic plate, it’s on the other side of the San Andreas Fault, which means that it is steadily moving north and away from San Francisco. It is and has been for the last fifty years a hippy community. Bill, whom with I am staying, described it as a “drinking community with a fishing problem”.

Bill, my host, is a super chap I met at Burning man. He’s in the software business but that is not his primary interest. His primary interest is having fun. We went downtown on Friday night and had a couple of single malts while listening to live music. On Saturday we planted some shrubs in the new garden he’s developing across the road from his cottage and then, after I met Vera, his wife, I left to get myself settled in San Francisco where I will stay for the following four nights.

Bill anso introduced me to Stuart, a real flesh hippy, not a fraud like me. I love hippies, I love their capacity of living in the now, damned be the eighties and the rise of individualism which corrupted so many people away from the one true balanced lifestyle which is hippyism. I’ll never wash again!