Beauty is there for those who can see it.

The picture below was the first thing I saw this morning coming out of hibernation. It rained a bit before I got up and that meant that I was late in leaving allowing some time for the gear to dry up. When I got going though the weather was good and I enjoyed 3 hours of cycling in the sun.

The ride today was going to be shortish but the thinking was that I was going to spend some time in Russell enjoying all that the Bay of Islands has do offer. As it turned out that was really lucky as the terrain was rather testing. A succession of up and down hills made the going very tough.

The route was pretty unremarkable to start with with the only exception being the presence of lots of fallen leafs and that smell that is so typical of autumn. I did enjoyed though, and in some point even thought that going on steep climbs was going to be good for me.

It was not long though before the beauty of the land came flooding in. As soon as I hit the coast the succession of bays with incredible rock formations and superbly picturesque sandy beaches was almost to much to record. 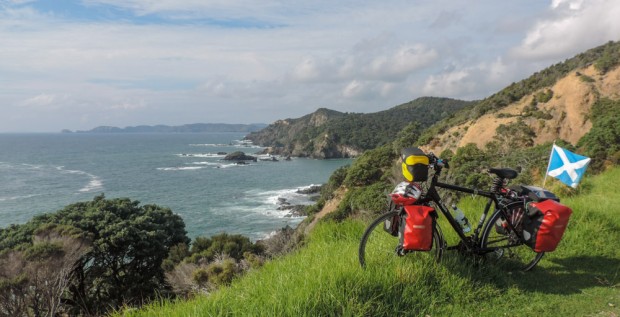 The picture breaks were really necessary. It is one thing to go up a steep hill and then to stop or to have time to recover in a long winding descent. It is another having 20 or more 60 feet steep hill one after the other with the only relaxation being the 60 second of descent between the one and the next.

It took three hours to get to Russell and that was quite remarkable, considering the terrain. In the end I was too tired to go around too much, I only did a quick bike tour of the town before stopping at a beach front establishment for a highly needed feed.

There were no establishment whatsoever between the campsite and Russell so my only form of sustenance up to this point had been 1 Mars bar, one oatmeal bar and one peanut and honey bar. I badly needed proper food.

The weather was turning a bit but I sat a while reading my new book before making my way to the ferry. I am realising that it is more and more difficult to carve some time for myself when out and about The bike, and in particular the solar panel, are attracting people and I’m left with the autopilot repetition of both the New Zealand trip and, for the more inquisitive, the story of my life.

One of the thing that I find amazing is how people do not manage to place my accent. I am actually making a conscious effort to sound Scottish in the hope that if I can pass myself for a Scot I can trim at least 3 minutes of the “story of my life”.

What I am however not shying away from is to record any piece of Scottishness I find along the way and they don’t come any louder than this below.

Today was the first day that the CamperMate application let me down. The 3 pictures below were taken at the spot that the application said I would have found a campsite.

What I found was a drop toilet and a little parking place next to some minor waterfalls. It was very pretty and it was fortunate that next to this spot, 400 metres before, there was a camp site where I am spending the night.

The evening brought something unexpected. I was eating some cheese and bisquits with the half bottle of wine left from last night in the campsite kitchen and at the same table there was a maori lady having a slice of toast. Her husband and child were also around but they seem to be busy with the remaining large maori community in the campsite.

She started to talk to me telling me that I looked like the spit image of her brother that now lives in Australia. We spoke for more than an hour and she told me all about the spiritual meaning of Cape Reinga as well as the kauri forest on the west coast. She also told me about her life and her 5 children that are now scattered all over the world.

It was really interesting and educative, it appears to me that maori are very spiritual people and I now understand a bit more why they are so fiercely protective of their traditions. I think they might still have something that we traded long ago for a washing machine and an iPhone.