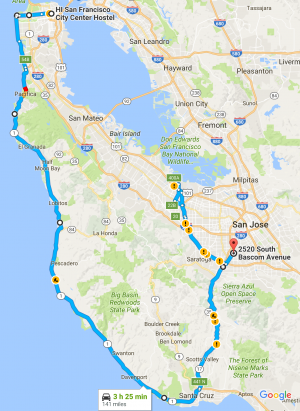 Oh what a lovely time I had in San Francisco, it’s now time to move on and the first step is not a big one. I’m going south along the coast towards Santa Cruz before turning inland to go and see Google campus and then stay the night with another new friend that I acquired at Burning Man.

The coast is great and the road interesting but the google Campus is rather uninspiring, perhaps had I had a guide and been able to go inside the buildings it would have been better. Never mind, I’m really looking forward to get to Nicola’s.

Nicola is an Italian Physics graduate turned software entrepreneur that runs a company which has branches both here in silicon valley and in Italy. He is my kind of guy, crazy and at the same time highly educated and interesting. He cooks for me and his wife a great pasta and we down a bottle of wine like there was no tomorrow. Then we followed that with some grappa and, anticipating by only a couple of week the passing of the legalisation legislation, with some fine Southfarthing Pipe-Weed 😉 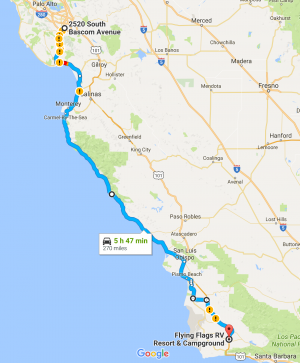 Second day it’s just riding really, weather is good and the coast splendid. Mental note: come back and spend some time in Big Sur, the quick pass was too fast.

Aside from the great omelette in Monterey and the amazing encounter with the Elephant Seals a rather uneventful day. I found a great campsite in Buellton and decided to treat myself to a steak, the size of which challenged me to the point that I had to take half of it with a large serving of potatoes away for posthumous consumption.

Funny how in a trip like this getting to a place where I had been before, even if only once, makes me feel relaxed. It is hard to underestimate how tiring exploration is, when every single day everything is new your mind does not have any time to recover and relax, resting on something that is known. I had ridden the coast from Santa Barbara to Los Angeles three years ago when I came to my last EDUCAUSE conference, that time I had an Harley and the bike ride was only three days.

Unsurprisingly I did not remember any of the road, I don’t think I was fully conscious during that trip, Tarn had just died and I did not manage to take any pictures, as every time I took the camera out I was chased by the question “Who am I taking these pictures for?” I have since then taken thousands of pictures but I cannot deny that that thought is still at the back of my mind more often than I care to admit.

The route takes me through Malibu and Santa Monica all the way to Venice Beach where I stop for lunch, consisting of the leftover steak and potatoes from last night. Afterward I make my way through town to Rancho Cucamonga where I’ll be spending the week end with Ken, my biking friend from Arches (earlier in the trip). On the way there I make a couple of detours taking pics not only in front of the legendary Troubadour but, after riding up Lauren Canyon Boulevard and Mulholland Drive from the top of the hollywood hills.

Descending on the north side of the hills I ride through the main film studios that had always been concealed to me as I mainly visited the costal part of LA. Finally I rode for a good two hours in a proper bumper to bumper LA interstate traffic jam and got to Ken just a few minutes after he got home from work.

Wow, was staying with Ken fun or what? On Saturday we just hang out and go for a bike ride around Rancho, which I have to say is less than spectacular. On Sunday however we let it rip. We met with a bunch of other fellow crazies and headed for the desert, El Mirage Dry Lake to be precise, taking with us all of Ken’s kit. He runs a small charity that offers dirt bike training to veterans as a way to get them back on their feet.

After we all got kitted up I started riding a 125cc four stroke bike and finding my way both on the dry bed and on the sand dunes at the side of it. While my experience with dirt bikes is limited confidence came quickly and I then moved to the two strokes 250cc blue beast. Doom was upon me and it was inevitable that just after the ascending curve of confidence intersected the curve of actual skill disaster would have stricken. I was jumping away in the dunes when suddenly my back wheel landed in a soft sand spot and the bike went down with my left hand under it. As most fresh hits it was not too painful and I continued riding for a while but I will find out in days to come that it will take a while before my little finger works as it did again.

Still… WOW, might just have to buy a dirt bike of my own. 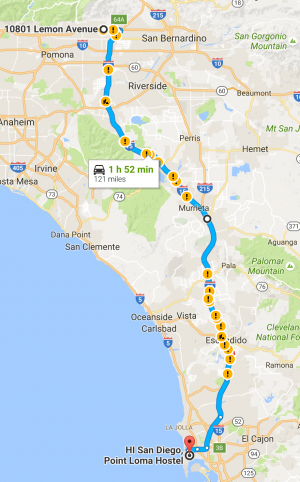 Monday comes and I leave Ken for the south, the weather is not great but I only have to ride a couple of hours to get to the most south westerly point of continental USA, San Diego.

I will spend a few night here mostly just chilling out. I have to admit that by now I have got to the point where the thought of ling riding days is starting to irritate me. On top of that the climate in San Diego is so good that you’d want to stop for a week.

In the end I stay to watch the last presidential debate of the campaign and then get back on my way, Route 66 is awaiting, as well as friends to see.