Leaving Flagstaff is a good example of why planning ahead it is not a good allied of the traveller. I initially thought I would stay on Route 66 but Eva and friends convinced me to take a detour.

The road down from Flagstaff to Sedona, the 89A is a sight to behold. It starts in the usual north Arizona pine forest fashion before, almost literally, stepping off a cliff into a deep canyon lined at the sides  with spectacular rock walls. This, I guess, must have been the point where I made the decision of loosing 30 pounds of weigh and, of the remaining body mass replacing 20 pounds of fat with the equivalent in strong muscle fibre to get climbing again. Of course the re-exposure to it in SF helped. Let see how long this one lasts 🙂 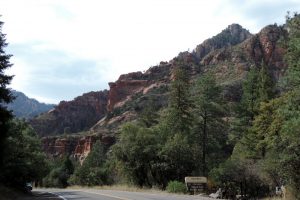 I should have staid longer, but my mind energy is getting low and this is, more than most shown that I’m only putting fingers to keyboard almost two months after I was in Arizona. The road down to Phoenix and and then Tucson would have for sure given me some more thrills. In saying that the magnificence of the red sandstone around Sedona was enough to justify a trip on its own.

My route is now turning east again, backroads in the forrest to get to one of the last novelty stops of the trip, Winslow Arizona.

So, what’s the matter with Winslow? Not much other than featuring in a song from one of the bands that revolutionised world music. In facts there so little more than the song on Winslow that even the Route 66 references are mainly clustered around the now aptly  called Standin’ on the Corner park.

From Winslow onward the Route is on the freeway for the most, so I decide to get out and visit what will be the last of the National Parks for this trip, the Petrified Forest National Park.

This incredible place is jam packed with petrified trees. What does this mean? well this area, a few million years ago was a forest, then it become a swamp and a the trees feel into the water, which, being silicon rich, sep into the tree trunks. As the organic material in the tree decayed the what got left behind was sort of a template of the tree now crystallised in silica rock. Over time the area eroded and these rock trees started surfacing, now forming the main attraction of the park as well as feeding a thriving petrified trees industry around it. 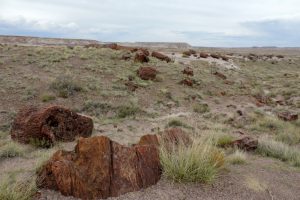 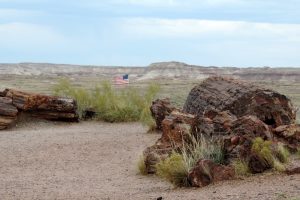 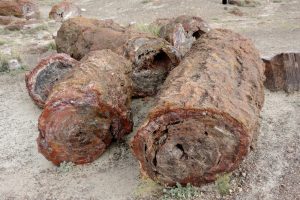 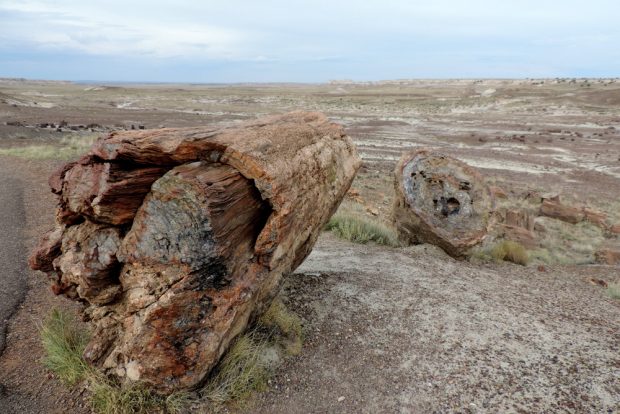 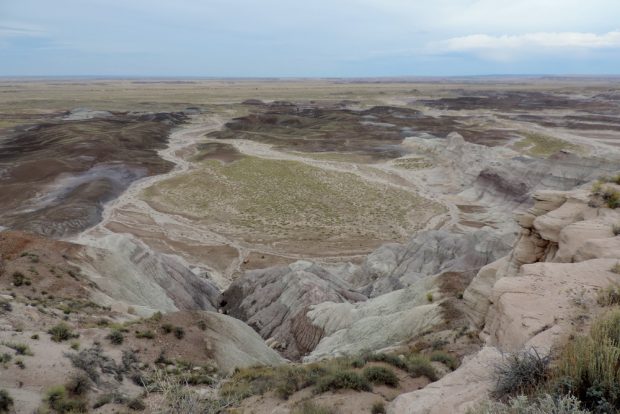 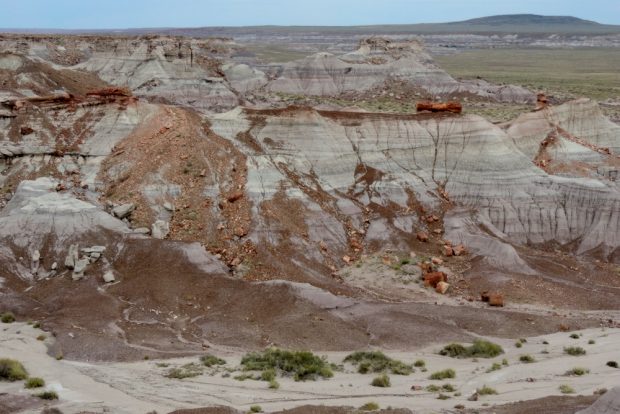 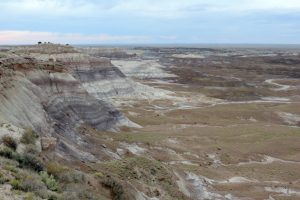 Leaving the park and getting back on Route 66 meant getting more of the signposted novelty stops. I guess it must have been really a hoot to come through here in the heydays of the route, when the freeway did not exist.

After stopping for the night in Gallup, the first night where I had to lock the bike and went to sleep afraid of not finding it in the morning, I was off again and now in a new state, New Mexico.

The night in Gallup was also memorable as I met a really nice guy with whom I hared a beer and a chat in a local watering hole. From Oregon and only down here to follow his girlfriend that is working as a nurse, we discussed sailing, guns, politics and world economics, I guess the usual things you get to talk with people you’ve just met 😉

I had not planned it this way, hell do I ever plan anything? but I ended up spending another night in New Mexico. The town of Tucumcari is unremarkable in many ways, I’m not even sure what it does in the middle of what feels, at times a lot like a desert. However Route 66 goes through it and they really are milking it for all it’s worth. I spend the night in the Blue Swallow Motel getting what can be described as a true vintage Route 66 experience. 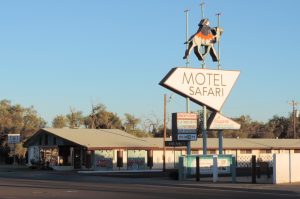 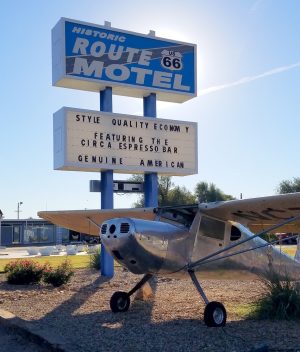 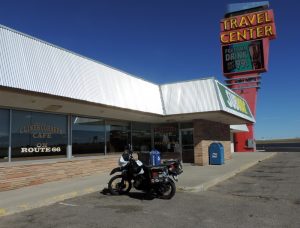 Leaving New Mexico I stopped to both a super service station, and then, once into Texas, at the famous Cadillac Ranch. A whole bunch of years ago a texan with a sense of humour decided that it was a done thing to plant a bunch of Cadillacs into one of his fields. Over time people have started decorating them with graffiti and, now, spray paint is left kicking around for any of the visitors to leave their mark. 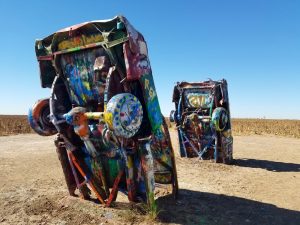 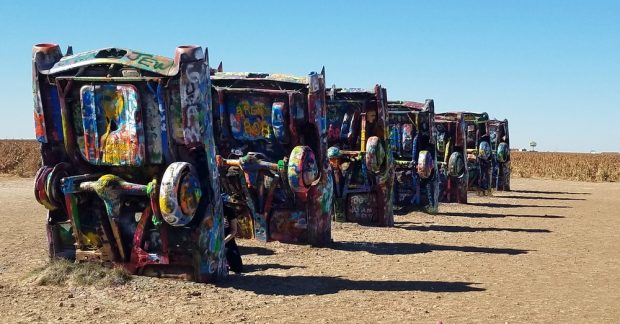 The final stop before exiting Texas again, on the way to Oklahoma, was at the famous Big Texan steak house. I had heard of the existence of places like this, but I never saw one. These restaurants, of which I am told there are a few dotted around Texas, offer a deal on their 72 Oz steaks (that is 2 Kg of meat): you finish, with trimmings, within an hour and you don’t have to pay for it. What is astonishing is that not only that there were a lot of people on the leader board of those who managed, but that the record is less than five minutes 😐 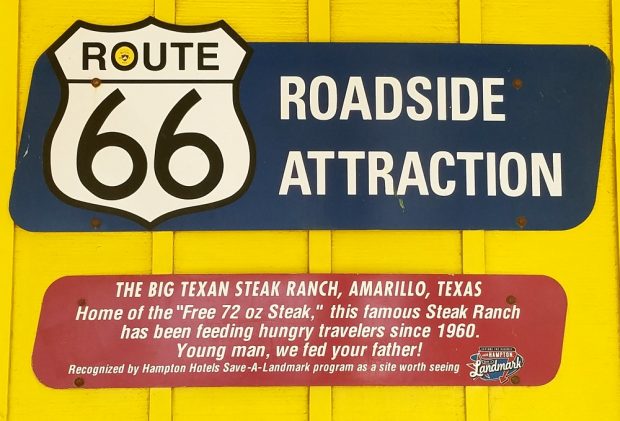 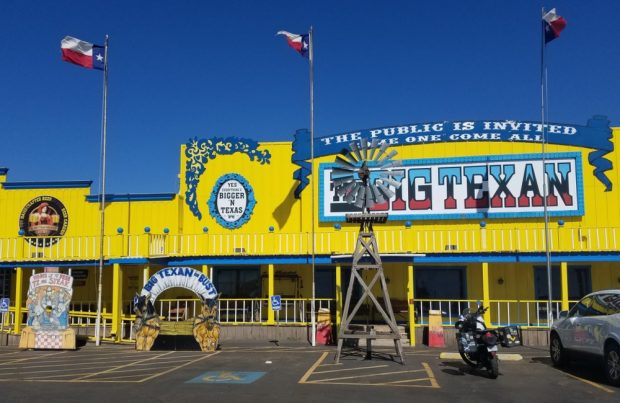 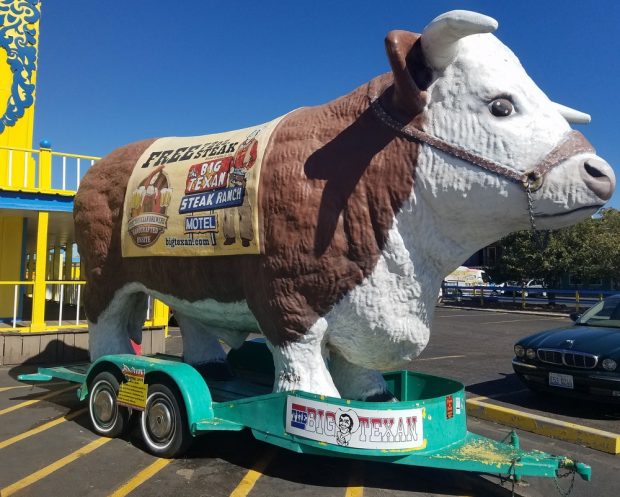 And then to the last new state, Oklahoma. The grass is, in this case, is truly greener on the other side. It was weird how just passing the state line seemed to have a greening effect on the land around me. I stopped in Elk City where I took the opportunity, as Oklahoma was for me going to be the last state on Route 66, to go to the National Museum. At the same time I also saw a whole bunch of Americana in the adjoining exhibition buildings. 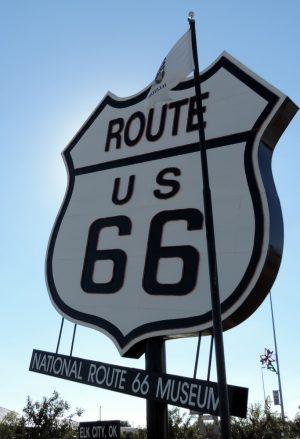 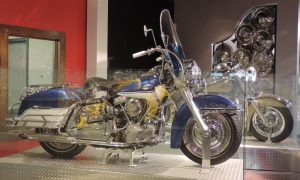 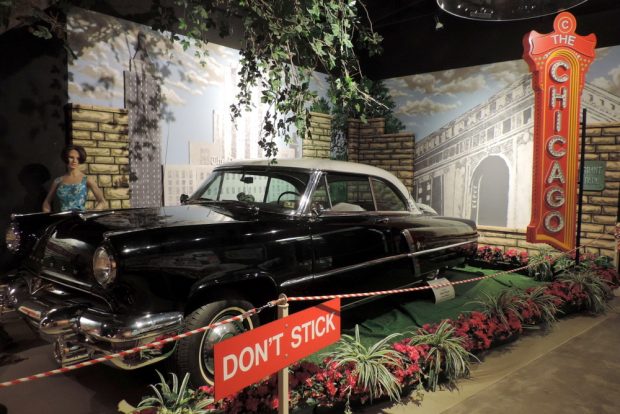 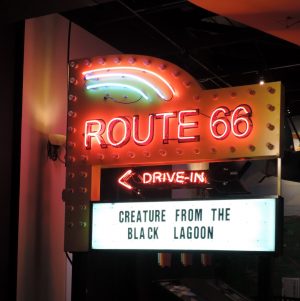 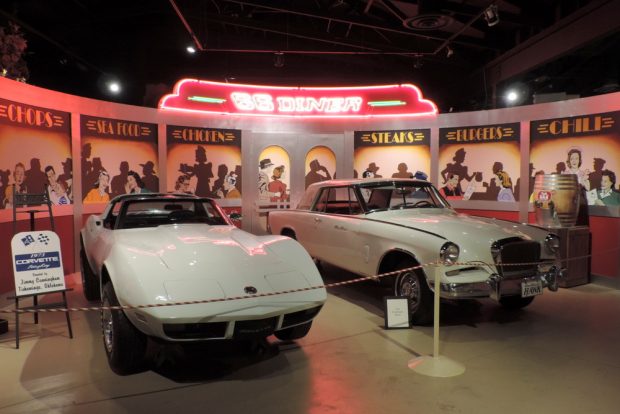 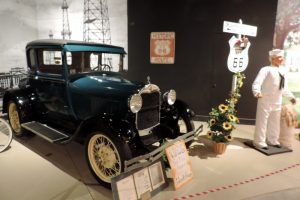 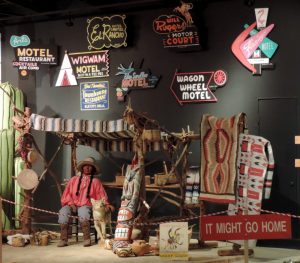 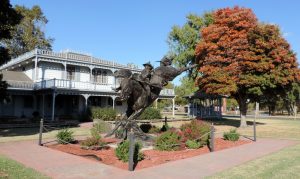 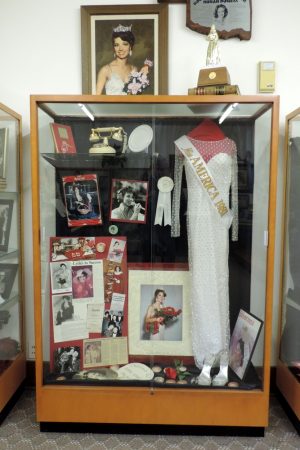 After Elk City many more miles separate me from the second last night on the road and the first night I spent in an AirB&B. I stayed in Oklahoma City hosted by a wonderful couple that put up with my clumsiness in getting nothing less than red wine on their sofa.

The trip is about to finish, tomorrow it’s back in Texas and in two days I’ll park the motorbike with David. I’m looking forward to it and while the future still holds more questions than answers I know now that four months on the trot might be a little bit to much for my old bones.