Last day completely abroad, and it’s the day I’ll be going through more border posts. Also I’m going to go through the only ones that will require me to produce some sort of identification. I’m not apprehensive, more a little bit curious as I will go to through what apparently now is the frontline of the refugee crisis.

First on the block is Hungary which is in the process of deploying barbed wire at his borders to prevent illegal immigrant entry. I get to the border and find nothing but an abandoned border post and a set of signs with welcome to Hungary and bye bye from Austria. I guess the do not expect problems on this route.

Roads in Hungary are fine and I practically ride a long straight one that takes me all the way to lake Balaton. I go around it and pause in a village just to rest a bit and have a snack. On the way out I go past a very large group of college kids, the boys are taken by my bike and the set up while I’m taken aback by the looks of the girls, I have to say I am impressed by the looks of central European women.

Aside from being distracted by beautiful girls Hungarian roads pose other problems. I do not encounter either animal drawn carriages or tractors, as warned by the road signs, but get rather annoyed with the two ruts that appear to be a constant of all the roads I go through. There are no pot holes so the tarmac used must have been good but it looks like a few to many heavy lorries have gone over it and this means ruts and motorbikes are rather succeptible to change of camber.

Before I know though I’m out of Hungary and into Croatia. The first sign of the border is a platoon of Hungarian soldiers putting down barbed wire either side of the bridge I am going over. Now I have not revised my Shengen and therefore don’t know that Croatia is not a signatory of the treaty. This means that when I get to the border and I get asked for my documents it takes me a while to scramble into the panniers before I produce the passport, they are happy with my British passport and I’m on my way. 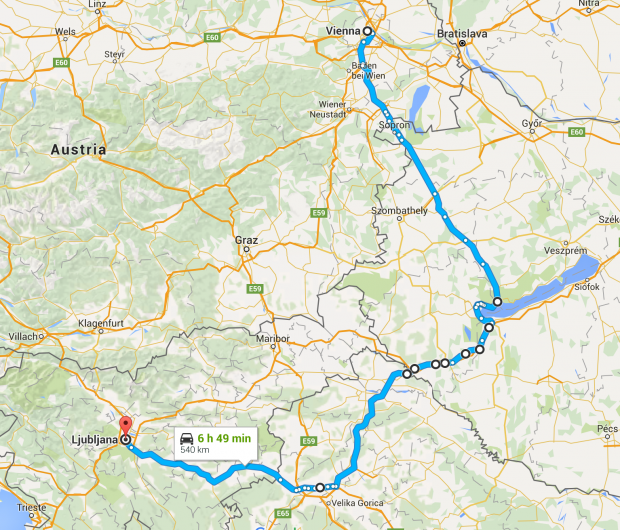 There is no choice but to get onto the motorway which suits me fine as I am keen to get going as I want to stop for a bite in Zagreb but not waste too much time or to sacrifice time in Ljubljana.
Zagreb is not impressive, better than Bratislava but a bit run down and not somewhere deserving more than a quick glance this time round.

So I grab a slice of pizza from the station bar and manage to pay with a credit card so that I’m not loaded with a handful of worthless Croatian coins. Yes as they are not only out of Shengen but also out of the Euro. After that I move fast in the direction of Slovenia that thank god is not very far.

The last obstacle is exiting Croatia where not only my documents are checked again but I am also questioned by what appears to be a member of the security services asking me all sort of intricate questions about who I am and what am I doing, where I come from and why was I there. All things that get quite complicate considering my life of the past two years. Luckily he’s satisfied with my answers and I’m on my way to Ljubljana.

A bit after the border I join the motorway where I suspect at some point someone will ask me for some money. I am not too concerned as here they do do Euros. What happens instead is that I am waved through all the tool booths I encounter and eventually I get to Ljubljana without having paid a cent.

I get into the hostel and I immediately go out for a walk in the town centre. Ljubljana looks like a small place but it also looks beautiful, Vienna beauty but with warmer people, I think I very quickly fell in love with it.

After a comprehensive tour of the centre of the town I choose a restaurant and have a nice meal. It’s the last night out of the tour, tomorrow night I’ll be in Modena and eat mamma’s cooking so I go for it and choose a nice Argentinian steak house where some steak tartare is followed by a perfectly cooked ribeye steak all washed down with two nice glasses of Barbera.

After dinner I take another straw in town and eventually end back at the hostel where despite the availability of wifi I fall quickly asleep tired after a day that saw me cross four countries and touch three capitals.