And so it starts, bike packed and ready to go. I’m going to be back to Halifax at the end of the week as I have the first service booked at the dealership. I guess it’s a sort of slow start for a trip that from this end, looks like it’s going to last an eternity. I guess it’s always the same on the first day, the good thing this time is that the legs will not hurt tomorrow.

The last night in the hostel was good, I spent it chatting and drinking with Stef (from Dundee) and Jacob (from Calgary). Might see Jacob when I get to Calgary and will for sure see Stef back in Scotland, perhaps even back here when I get back at the end of the week.

The first day of riding is rather eventless. It’s sunny and I am only at the right temperature when I’m on the go, I might end up riding without jacket if it gets any warmer. Over the next two days I will be going through both the Lighthouse Route merging into the Evangeline Trail.

I stop several times to take pictures and to refuel. Fuel is rather cheap, more or less half price compared to the UK. I also go through the golden arches for lunch,  must remember not to make it an habit or I will really need to hike a lot to keep the weight under control.

Eventually I start to see curious things that make it worth stopping and taking pictures. It’s Nova Scotia and therefore the reference to Scottish geographical features is no surprise, what is more of a surprise is to get to the site of an actual UFO landing. Not sure if the giant chair was there as they expected the martians to be rather tall. 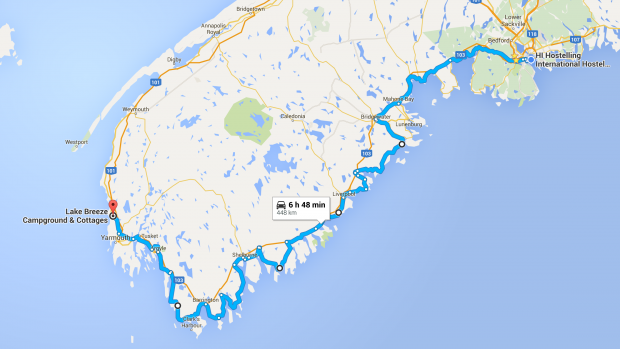 I stop just past Yarmouth, after getting some supplies and a bottle of Jack Daniels. I decide to start checking out the campsite scene and, surprisingly, I discover that camping is comparatively rather expensive, £16 a night, when the hostel is £17. Rather curious, I wonder if it’s just a Nova Scotia thing.

I fire up my stove, I got fuel for it while I refuelled last, and boil some water to get some noodles going. It works well, I’m sure I’m going to enjoy more hot meals in this trip than I usually do. I also stuck the large MS Society stickers to the side of the panniers, but, sadly, they will only survive there for a few hours in the morning. The panniers appear to be coated with a rather stick resistant coating.

Night is warm and dry and I’m up rather early in the morning as the days are long this time of the year. It’s a bit overcast but not raining so I get on my way north towards Digby and Annapolis Royal. I stop for some breakfast in a diner and discover that even the less assuming venue appears to have WiFi, as well as  good complement of old people gossiping about the comings and going of the local community. It is rather amusing to listen to them while I get a nice coffe and a couple of eggs.

A few stops and i get through most of the Acadian territory. It is quite interesting how, just watching the headstones in the graveyards yo really feel like the population here was of French descent. I got myself a little flag to stick to the panniers, in the hope it will stick.

I decide to stop in Annapolis Royal and I stumble on an historical exibition of WWI stuff, I guess the commemorations are as in full flow here as they are over in Europe. From here I message John, my Couchsurfing host for the next two days, we agree to meet in Wolfville. 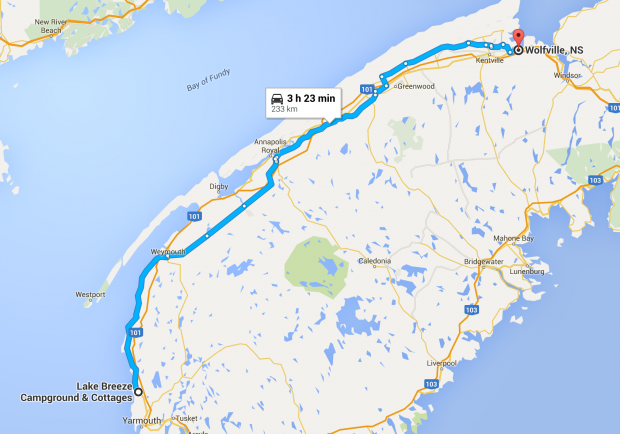