May I have finally run out of luck with the weather?

It is 10:30 in the morning and it’s raining. It is also quite cold, I am wearing the cycling shorts, the long lycra, the trousers, the blue, heavier, cycling top and the waterproof jacket. I am still cold, and I’m not even outside.

I’m catching a bus out of Dunedin as the stage today would have bee 75 miles, a bit too much to make it in the rain and the wind. The bus is leaving at 1:30 so I have to kill some time this morning, but I cannot find any excitement for going out in the rain.I guess being at the latitude of central Europe and being at the equivalent of mid September means that I should not be too surprised.

I have a new fleece, rather nice for $30 and sure to be needed tonight and tomorrow night in the camp. With any luck I’ll get to see penguins, albatross and sea lions, the last ones not too close I hope. It is going to be later than usual when I get  to the camp as i am being dropped by the bus in Balclutha after 3:00 PM, but there still should be plenty of time to complete the short 25 miles ride in full light.

Well i did it, but not without incidents. I have to be come more proficient at the bus transfer thing. Before loading the bus I tidied up the bags with the result of loosing the head light, I guess there will be no reading in the tent tonight. While dismounting the bus, or better, while unloading the bike I must have dropped one of the aluminium water bottles and only realised it after the bus had left. Luckily it was the one that  was more damaged.

The 25 miles to Surat Bay were ok despite the rather strong southernly wind.  After the first 10 miles a gritter overtook me but it was not in operation, I was a bit puzzled but It seemed a bit early for that, or did they know something I did not?

All a bit worrying, maybe I should have bought that better sleeping bag in Katmandu yesterday. Ouch, did I not mention I popped into it in Dunedin?

I eventually made it to the coast, not sure but I think this was the first time I was on the proper open coast of the Pacific Ocean.

Another hour or so and got to the camping and that was with a full two hours of sunlight to use for some pictures on the beach, might even find some wildlife.

The views were super and I ended up taking way more pictures that I could possibly post. Well let’s try.

Amazing patterns on the sand

A set of pictures exploring reflection of the light on the low tide beach. 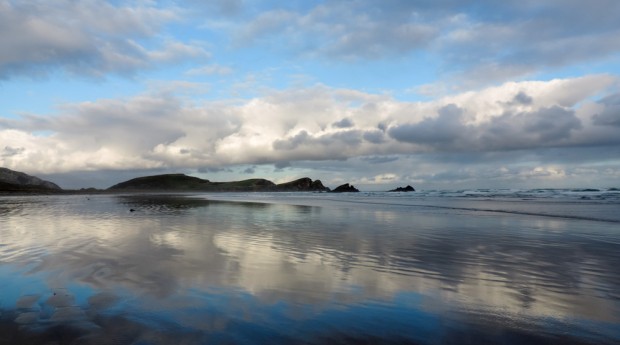 Trying to capture the light rays out of the clouds. 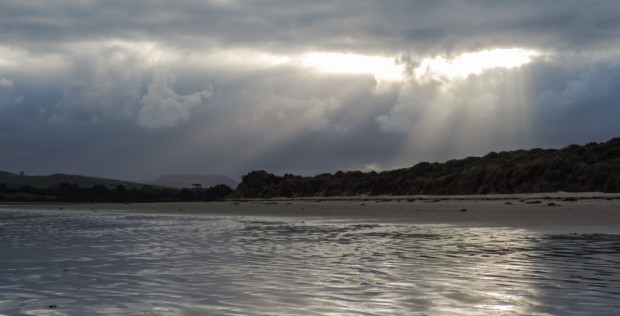 Random stuff that attracted my attention.

And finally, something that came out of the sea.

I could not believe I actually got to see this, my bad luck and all. The pictures above were all taken progressively close and then I got to a point where I guess my model had enough of me and started to charge. At the closest I guess I was approximately 5 metres from it. These beast are not exactly sprinters so evenI could retreat enough to feel safe and once he realised I was on the way out it stopped and assumed a quite princely pose.

Amazing. No penguins yet but maybe I’ll see some tomorrow.