So much for the second relaxing day

There we go again, the best laid plans go to pot. Today was meant to be the second of the so called “relaxing days” to be had to prepare myself for the last three days of work before I get to Queenstown.

First let me share with you something I forgot to show you yesterday.  Just after Guillelm and I had arrived and chosen our pitch, in fact just after we had taken our selfie as I still had the camera handy, a whole family arrived . Mother and father in the front seats of their respective tandems and the two daughters in the back seats. this made me think about all those people that think what I am doing is hard. Think again, this family gets the gold medal, by a sizeable margin.

Ok, let’s now go through my day of misery.

First I spent an awful lot of time in the tent doing things as well as sleeping, from last night at around 18:00 to this morning at 9:00. I have now become well accustomed to sleep in the tent and nature or mankind do not disturb me anymore. What however I am still not good at is living the tent. You have seen my tent and it’s not that big, even if I was to get another one it would not be bigger, if anything smaller, so I have to find a solution to the issue of having to do things like working on the laptop or playing the ukulele in the tent,

I think one of these might feature in my future shopping. 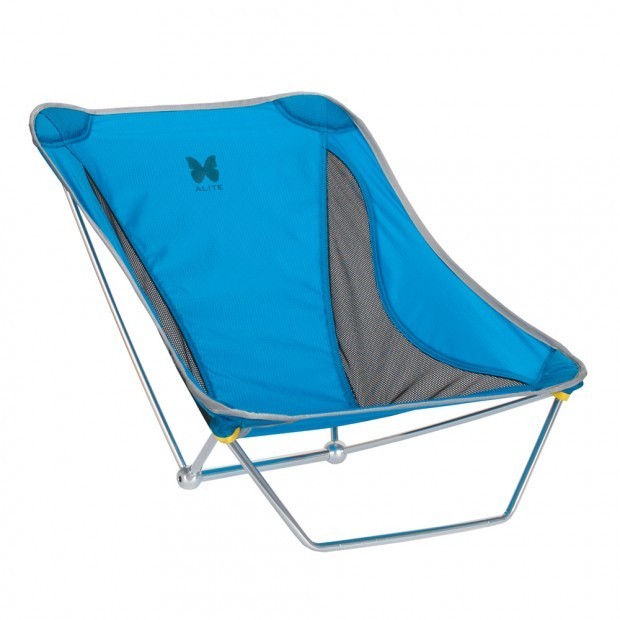 I was momentarily concerned as if the floor of the tent had but the smallest of holes I’d be soon swimming. It had rained all night, at some points very violently so it was no surprise that there was a lot of water, the only upsetting thing was the bad choice I made with the placement. Luckily the only water inside the tent was probably due to condensation and, had there been a hole, the water would have been in much before I realised there was water under the tent.

By 9:00 it was still raining but I really had to go to the toilet. I knew that getting out of the tent was a one time operation so I got dressed, packed all that I could pack and got out my heavy duty rain cover. Once out I gathered all the stuff on the bike and took the bike under the small shelter by the toilets and carefully dismantled the tent trying not to get the inside too wet.

All this done, would you believe it, it stopped to rain. I had some food with Guillelm that by now had come out of his tent, and then I left.

I rode for only a couple of miles before it started to rain again and I made the good decision of covering up again. From there on it was a good 15 miles, pretty much till I got to the coast, before I got to see the sky again. It was a bit of a shame as I went past some areas that would have been really enjoyable both from a scenery and a cycling point of view, if the weather had been different.

I cannot really complain too much though, if the biblical deluge I’ve been waiting for days turns out to be what I get today and what I’m planning to avoid tomorrow, then I have really got out of the west coast scot free.

The road got a bit more interesting as soon as I got closer to the coast. When you’re wet and all covered up, cycling is not fun and the question “why am I here? ” pops into your mind with a predictable frequency.

Fortunately I find that New Zealand has an answer for that. As you get all depressed, the weather changes and you’re faced with unparalleled natural beauty which makes it all worth wile.

You only need to look at the ragged coast beaten by the furious waves to be blown away. 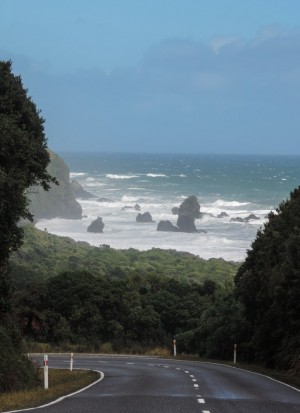 After going through the rain twilight zone where if I was wearing the cape it was not raining but as soon as I was taking it of it started, the wheatear finally healed and with that the pace picked up.

The next stop I made was at Ship Creek, I did not go for the swamp walk but just took some pictures of the sea [The top one from the lookout tower].

Only 7 miles of flat cycling left now, almost home. It is at this point that I start feeling that the flat is a bit more difficult that I expected. What was it? but of course, the wind had started blowing from the south and it was finding no obstacles in this flat land.

I decided to stop for some food when I saw the sign of the Curly Tree Whitebait Company, it was splendid and the guy there is a real cool dude.

Getting the last few miles in was really painful, there is little more frustrating than having to toil while riding a flat surface, but it got done and in less than 20 minutes I was on the Haast river bridge from where I took pictures facing both ways.

I have decided to stop here tomorrow and to ride on on Sunday. The weather forecast is rubbish for tomorrow and I’ve decided that it’s not just miserable to ride in the rain but you don’t even get the pleasure of the sights, it’s not that I’m around here all the time so I better make the most of it.