​Things are starting to get a bit faster. It is always like this, at the beginning of a trip it’s a bit of a struggle to get your brain into gear. It took me nearly a month to fall in love with my North American trip, I blame it on the extended loneliness. It is faster this time, I suspect the number of interesting people I met in my first stops is helping. Well, Delhi is going to add to the count a whole new tonnage of cool people.

Landing in India for the first time intimidated me a little bit. Many people had spoken of the cultural shock that most people encounter when faced with the dirt, smell and noise of Indian cities, but the truth is that no amount of description of it can prepare you.

The traffic, as seen by the cab getting to the hostel, is impressive, not as dramatic as Iran, but certainly noisier. Also the fact that half way through the ride I see the people in the car ahead jump out, jump the reservation and run away, hotly pursued by people with long sticks that have appeared from the opposite side adds to the puzzlement. It is apparently just your average road rage incident, the driver tells me.

The hostel is good and I keep myself to myself for the first afternoon by doing the laundry on the rooftop. I venture  our in the evening and have a meal which, as well as being delicious, is not as different to what I get in the Village Restaurant next door to my flat in Glasgow. This is for sure the first surprise of the trip.

Morning of day two starts the socialization process. I join a group that is planning a random exploration of the south side of Delhi as well as a chase for tickets for the National Day Parade. Spending the day with a bunch of cool travelers is what sets hostel living aside from other forms of traveling, what we get to see is great too, but new people are just the best thing about traveling.

We get back to the hostel and we take a wee break, only to get ready to go out again. Joined by Louise and Emma, two cool girls from the Independent Republic of Cork, we go to a piano bar club where I buy the most expensive double shot of Talisker in my life. Singing, by the resident dude, is fine but then Louise takes to the stage. Her voice fills the room and people are silent in motionless admiration. The girl can truly sing.

Day two is a long day. I’m off to Agra, to see the Taj Mahal and Agra Fort. A different group of people this time, somewhat younger, and in bits less mature. I find that I am starting to accumulate a sufficient amount of experience on my fellow travellers. It appears to me that there are certain parts of the world’s that attract different types of people. South East Asia for sure attracts the young party crowd, the not so young culture seeking crowd and the self seeking old people like me. Well, on the trip to Agra we have all three constituencies represented.

The Taj Mahal is breathtaking, and what makes it even more poignant for me is the feeling that it very much tells my story. A man commissioned it as an eternal testimony to his love for his lost soul mate. I left the rest of the group and wandered around taking pictures and reflecting on what I’d lost.

India is not the easiest if places to navigate as a tourist. The poverty and need make of almost every person a potential fraudster. During the day we survived not one, not two, but three scam attempt, two of them attempted by our own driver.

After the Taj, and a rather nice and inexpensive lunch, we move on to the Fort. The young fun seeking couple with us decide not to visit it and save the 400 Rupies of the ticket. An odd choice in my and the others’ opinion as it would be rather unlikely that one would go back to Agra just to see the Fort, why not see it it while you are already there, and forego one of the three or four beers in the evening.

Anyways the Fort was spectacular and it was worth the ticket, the money for the guide and the tip on top of that. 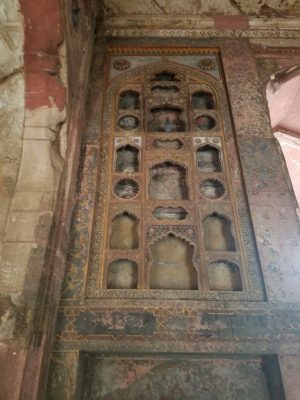 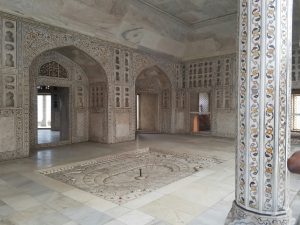 But it was not over for the day, the evening back in the hostel brought a beer fueled gathering with new and old friends. I spent most of the time talking to Emma and Louise, I have to admit I become very quickly very fond of them, I blame it on the keltic connection.

Day three is the parade. Vamsi, our southern Indian member of the little hostel gang, says no cameras and no phone so I have no pictures of it but the atmosphere is amazing.  When ever do you get to see ICBMs parading in front of you. The weather is turning though, and we are lucky not to get completely drenched on the way back to the hostel.

It’s the last day in Delhi and I share a cab to the airport with Emma and Louise, they are going to Goa more or less at the same time as I am going to Singapore. We spend the final hour or so chatting away and then we part with the promise to gather again in Glasgow at the end of May to do the West Highland Way together. Oh, I forgot to mention, Louise lives in Glasgow and Emma is moving to Athens to work with refugees which meant I already put her in touch with my friend Kenneth who has runs a charity that does just that. Sometime I amaze myself with the level of connections I have, perhaps I should be in PR.