El Calafate is a funny place, it does not resembles anywhere else I saw in Argentina before.  In fact it reminds me a little bit of Queenstown in New Zealand. As I get into town I see many shops advertising all sort of weird and wacky adventure experiences.

After I get all my ducks in a row (accommodation, tickets and so on) I turn in and, due to the ticket to El Bolson being on Thursday I have three days to fill with El Calafate experiences.

I start with a day off, both to recover strength and a bit forced by the time needed to organise things. Nevertheless I don’t stand still and go for a little walk around the laguna.

Tuesday is the day of the glacier. I book the “Mini Treaking”, this is a bus ride from El Calafate to the Perito Moreno, a visit to the viewing platform and then a boat ride to the other side of the lake and a crampon walk on the actual glacier. the hike is short, an hour or so, but I’m looking forward to it.

The bus ride is fine and do not make friends, preferring to sink myself in some music. I made friends last night in the hostel with three super ladies from north Argentina spending the night discussing politics and all sort of things while downing a good amount of the local brew.

Watching the glacier front is almost mesmerising. Every so often you hear a cracking noise, not all of these noises, but some are herald of a slab of ice detaching from the front of the glacier and disintegrating into the water. It’s just spectacular to witness it.

After the time in the mirador and the insane wait to see if I could film the falling of a block of ice, I move back to the main balcony where, consumed my home made sandwiches I get ready to embark on the bus for the short ride to the boat leading to the treak.

In this bit of the ride I’m not listening to music and I sit next to a nice young lady who turns out to be nearly from my neck of the wood. Amarpreet (Am) lives near London and is on a eight months South America trip. She has relatives in Glasgow and Edinburgh so instantly we bond and go on spending the rest of the day together.

The hike is brief and only succeeds in making me want more of it. Am and I also make another friend, Joost a cool Dutch dude that does not speak like Sean Connery. This i just me probably, but I think that Dutch speaking English often sound a bit like Sean.

We go on chatting on the way back and agree to meet up at night for a beer or three. We do and have a good laugh before parting each to arrange the next move.

For me the next step is a move to the north, just for one day, to, for the first time, go white water rafting.

The day includes a two hours and a bit bus ride to El Chatain, the self proclaimed South American capital of hiking. The aim of the day is to go white water rafting in the afternoon but the day is built so that we get three hours of time in the morning to do a bit of hiking.

I decide to go for the median  distance, skipping, as advised by Joost, the walk to the waterfall that “only a sissy would do”, he says. 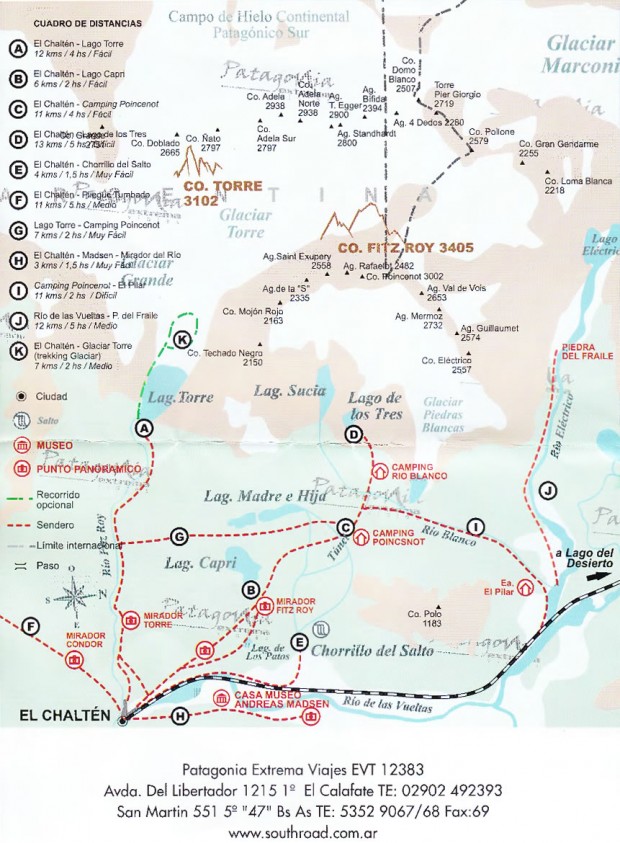 This route takes me to the Mirador Fitz Roy and then winds down by Lago Capri and back. It is a two and a half hours hike with a sufficient up and down and splendid view of the Fitz Roy. I do it in less than two hours which gives me plenty of time to rest and admires the views and also gives me hope for a hiking filled future. Perhaps the summer debacle in Italy was a fluke.

As you can see from the map, a week here would be well spent offering plenty of possibilities to explore mountains glaciers and rivers.

I stop at the Mirador for more than half an hour eating the “cotoletta alla milanese” sandwitch provided by the tour operators. The view is breathtaking and there is only a little wind making taking picture and resting not a problem.

On the way down I take the ring path towards the Lago Capri, if nothing else to assess the free campsite that no doubt I’ll be using when I come back camping and hiking here.

As I pass the shore of the lake, just before getting to the campsite, I hear someone calling my name. It takes me a second or two to realise that it was in fact me they were calling, many Alex around the world and few people that know me in this neck of the wood.

It is Andrea, the Swiss girl I met on the bus from Punta Arenas, she was sunbathing and wearing remarkably less cloths than the last time I saw her, so it took me a while to recognise her. She is staying at the camp and hiking all over. We have a little chat, updating each other on what we’ve been doing since we met last and then, as time is a factor, I get going down towards town to start the afternoon rafting extravaganza.

Unfortunately footage of the rafting is not available, but I am told that there will be some of the filming to be had and I’ll post it as soon as I get my hands on it. For now let just say it was really god fun and totally worth the six hours roundtrip.

We get back to El Calafate late but I manage to convince the hosts at the hostel to keep the kitchen open for a few minutes while I cook a couple of eggs and a salad which I eat with a teaspoon as that is the only form of cutlery available in sight.

Last day in El Calafate and I go for a time filling experience, zip wire. It’s not too expensive, I do not expect it to be terribly exciting but it includes lunch, and I have not had meat for at least 48 hours.

It really does not look anything like it is, not scary but quite good fun, at the end I also did it upside down, that was a bonus.

Hasta luego El Calafate, not quite Queenstown but definitely a fun town.