Leaving Las Vegas is not as stress free as expected, it’s truly like the movie. The bike shop is closed as it’s Labour’s Day, those A-holes told me to come and pick it up on Monday, also the rental place is closed so I just have to drop the car and come back the day after to try and get the money of the fine back.

Anyway that’s all good as I spend a lovely couple of days in the company of really cool people at the hostel. Haydn in particular I hope to hook up with again, a South African biker that is going across America like me and that plans to go from Africa to China in the future. I’d like to join him on that.

I’m obviously tired, the first day was just desert ride aided by some Red Bull, the second day was no better and I had to increase the Red Bull dosage to get to the campsite in the Gran Teton Park. At least i took some pictures.

Jackson Hole looks and feels a little bit like Aspen, I think there is a lot of money slashing around here. I get out of town very quickly and seek refuge in one of the National Park campsites, manage to rustle up a little wood and spend the night in quiet contemplation of the fire.

With the morning comes the next challenge, getting through, and visiting, to some extent, two magnificent National Parks: Gran Teton and Yellowstone.

I did not visit as much as I crossed Gran Teton. I guess a few days spent here hiking up and down the hills would not be badly spent. I also got to see the ski resort that, as I write, might already have snow.

After the coffee in the lodge I kept going, it’s still early in the morning but I wanted to spend some tie in Yellowstone and I did not know where I was going to spend the night.

As I get to main geyser area there are still 40 minutes before the eruption so I go to have some food. The cool thing about this geyser is not so much it’s size but its predictability, it erupts approximately every 90 minutes.

There is a crowd waiting and I get in a conversation with a chap fro the north of England who is hell bent on convincing me that the Brexit vote was a good thing. Why meeeee!!!

After the shown it’s time for a little walk to see the other pools around the main attraction. 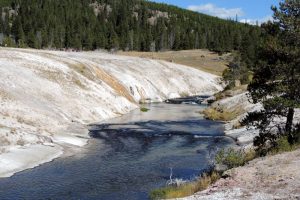 After a brief ride on the bike I then stop at the Grand Prismatic Spring area. 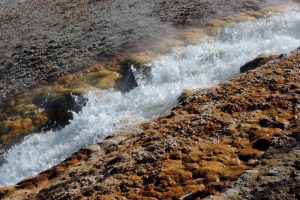 This was quite enough vulcanicity for one day, time to get going and try to get as close to Missoula as possible, tomorrow another adventure starts.

But before I leave the park there is still another surprise waiting for me, I see a bunch of cars stopped at the side of the road and I soon understand what’s going on, I stop and snap. 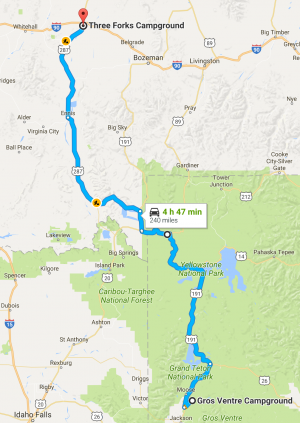