It was not going to last forever

Got up at 7:30, really getting the hang of this sleeping in the tent. I have found the right balance of things to take into the tent, things to keep at hand just outside it and things that can be left in the great distance as they will not be needed in the night.

I was fairly comfortable so the decision to get up was more about need than will. I had in my mind the words of Cathy saying that I am going too fast and I should spend more time kicking around, meeting places, exploring people, or something like that.

The neighbours were still there and still asleep in their car. Sometime I wonder about people, if I find it in myself to carry a tent and all the bedroom paraphernalia on a bike, why don’t the people with cars do so?

My camp position was great too, next to the river and with a picnic table next to me. The only problem I guess is when you share the field with sheep you and up with a lot of insects and that was one of the reasons I turned in very early last night.

It was also the reason, together with some drops of rain that lead to the first major setback of the journey. I was packing up, in fats I had almost finished packing up, and I decided that I should move all my stuff under the shelter as that would have saved me from packing wet stuff. In doing so I accidentally dropped the mobile phone and the picture below is the result of that. 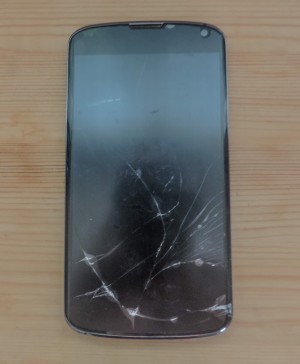 I was instantly upset. Even if the phone had some charging problems and I was already looking for a replacement, it was still upsetting to have to limp to the replacement with a spider phone.

Upset quickly turned to despair when I realised that in the breakage the glass was not the only thing to have been damaged, the pressure pad also must have as there was no way to unlock the screen. My Nexus 4 was now a glorified clock.

While contemplating this I finished packing and left on the road for Muchison. The plan for today was to get 60 miles downstream to another camp and then make it to the coast tomorrow. That was not going to happen now, what are my options?

Aside from throwing the bike down a ravine and get a lift to the next dive bar and drown my sorrow in JD I have to come up with a plan. It quickly appeared that any plan included at least getting to Murchison. In any event I’d get breakfast, if I was lucky a mobile phone shop or at least an information point where I could see what to do next.

Half way down to Murchison it started raining, as if my day was not miserable enough. I stopped for a while in a barn and sat on a hay bail commiserating my life choices. Then, obviously in a rather confused state, believing that t was never going to stop raining, I decided to take the plunge and get into town. As I got there I removed my over trousers and was left with the cycling shorts which were remarkably dry. The Katmandu top also performed very well and it delivered not offensively wet to the tearoom where I ordered breakfast.

I have to say the tea and the bacon were the only decent things on the plate. Not sure if it was my mood spoiling things but I left all of the sausage one of the two eggs, all the toast, which incidentally was drowned in butter and the sorry looking mushrooms. On the positive side, the tea was good and they told me where the information point in town was.

So now I have a plan. I’ll be staying at the Lazy Cow Hostel in town, just across from both the information place and the bus stop. As tomorrow it’s forecasted to rain again I’ll be loading the bike on the intercity bus at 9:30 in the morning and go to Westport, which was not on route, and get myself a new mobile phone.

After that I’ll resume riding down the coast to Punakaiki on what is described by Lonely Planet as one of the 10 best coast ride in the world, we’ll see about that.

I feel a bit better now, and sometime I am sorry that I use this blog as a sort of therapy session where I drag you all down with me in the lows of the lonely rider. I am not sure this thing I’m doing is the right thing to do, especially considering my current mental fragility. It is however the only thing I can think of doing so, until it breaks me I’ll stick at it, hope you’ll come along too.

Update: 17:00 So i went for a walk in town and bought myself a steak which I’m planning to cook tonight, part of the feel better therapy. The whole town was visited in 30 minutes flat, including shopping.

I did not manage to get into the museum, closed, but I saw the earthquake museum which was the equivalent of any bric a brac  shop in the UK. That should teach me not to search heritage down here, better confine myself to the wonder of nature of which there is plenty.