Nice evening at Camp Gonzo, spending the evening with the guys and a whole other set of people was fun but it’s time to get on the road again. Heading north towards Canada now and I’ve got a bit of a gamble ahead of me. It’s late in the summer and I hope not to meet any snow, snow and motorbike are not the best of friends. To start with I have elected to avoid the Glacier National Park in north Montana, the Going-to-the-sun road would have been great to ride, but I’m fairly sure it’s beyond the weather conditions.

First stop in Canada is in Kimberly with a friend, Jenny. I met her in the HI in Halifax and she’s now in British Columbia for a few months, working as well as looking forward to the ski season.

The time spent in Kimberley was so badly needed. I had a lot of fun in the last fortnight in the states but, between the Burning Man, the parks and the rafting it rather took my mental energy level to 0.

I’m leaving for the north again and the Banff, Lake Louise, Jasper leg of the Rocky exploration with a bit of trepidation. It’s rather cold and I am wrapped into many layers of clothing but the real worry is precipitation, if there is any it most certainly will be snow. 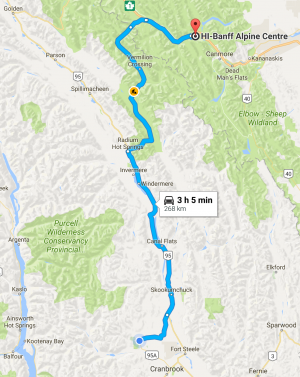 I get to Banff not a minute too soon, I’m freezing. The hostel is really nice and the weather turning for the better so I go down to the village for a walk. Banff feels a little bit like aspen and Jackson Hole, it looks like the place where people with money go, well, to spend it I guess.

I enjoy the easy going life of the hostel in the evening and even watch a movie, I seem to live constantly behind in my effort to keep the blog up to date so I do a bit of that and then it’s time to turn in to bed.

When I wake up in the morning I am greeted with some excitement by a young lady with whom I shared the room who informs me, wearing a big smile, that it’s snowing outside. I think I replied with a four letter word and then proceeded to look out of the window. It’s snowing all right, and my motorbike is well covered in the white stuff.

After some mental arithmetic and a bit of soul searching I elect to turn west and abandon the plan to visit Jasper. I might stop in Lake Louise if the weather improves but otherwise, it will be for another time.

It was a good call, I did not stop in Lake Louise in the end, it was snowing too much and I just wanted to get over the mountain to a better climate. The plan had seen a radical change and, as well as an unexpected stop in Kelowna, I had gained one day which I am planning to spend on Vancouver Island.

The hostel in Kelowna is rather cool, the hippest I’ve been so far. I spend the evening conversing with mostly Canadians and spend some time admiring the total wisdom of some of the writings on the wall left by passing travellers like me.

Which only leaves me one rather short day to get to the west coast. This day however includes another of my novelty places, Hope. Hope is a small town in the British Columbia Rocky Mountains which claim to fame is to have been the set for the 1982 immortal masterpiece of modern cinematography which is Rambo: First Blood.

I can still remember a Saturday afternoon back then when I was 13 when, with a bunch of friend from the swimming team, we went to the Cinema Raffaello in Modena to see this quintessential Cold War epic.

The place has not changed radically, they have an information centre that sells a bunch of Rambo memorabilia, they also have a visiting Hope magazine which offers a self guided around town tour of Rambo locations.

I am glad to have come back to Canada, I did not get to do the things I wanted to but I saw Jenny, Hope and, here on the west coast, the weather seems to be a lot kinder. I still have Vancouver and Vancouver Island to see and I will try and get in touch with a couple of Spaniards I met in Uruguay, they told me they were thinking of coming to Canada after South America.