So this is the end of the cycling part of the trip but I still have the matter of another half months to go before I set sail for the northern hemisphere and it’s starting spring. Given that I’m moving north I hope I will not get affected too much by the incoming autumn and make a seamless transition from warm autumn to warm spring. Wait, can that, I’m going to Scotland.

Anyway for now, dispensed the practicalities of buying a T-Shirt to celebrate the end of this stretch of Ruta 40, it’s time to get on the 20 hours bus to Buenos Aires where awaits for me a homestay with a friend of new, Violeta.

I met Violeta in Uruguay when I was working in the hostel, we kept in touch over the trip and I’m now going to stay with her for a few day to enjoy a bit of life of Buenos Aires or, to be more precise, Tigre, a north neighbouring town which is really part and parcel of the metropolitan sprawl of Buenos Aires.

Violeta comes to meet me at the bus terminal and we stop for lunch in a sea side bar on the way home. The weather is much warmer than it was in Patagonia and there are many more mosquitoes, the deet is instantly deployed.

On the day we don’t do much other than chat a lot and turn in quite early, I did not sleep at all on the night ride and I’m positively knackered.

On day two I sleep in while Violetta goes to work, she’s an art teacher in secondary school, and in the afternoon we go for a walk first and then for a canoe trip in the delta. 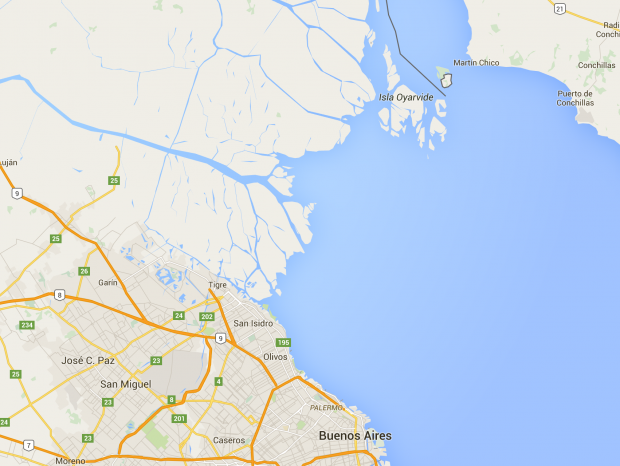 Tigre lies just at the side of one of the branches of the Rio Parana which spread into a rather complex delta prior to entering into the estuary which is the Rio de la Plata (the largest estuary in the world, I am told). The many different branches of the delta are criss crossed with canals that host many properties only accessible by boat. Our task was to reach just one of such properties to join Javier, the first of many of Violeta’s countless friends I am going to meet, for a mate.

The start is less than positive. Thanks to my rather complete lack of experience I get ourself upturned before we set a row in the water and we barely avoid a complete sinking of the boat. In insight that was actually a good thing as with the temperature we were facing being drenched was a blessing. Fortunately I had taken along a drybag which kept the mobile phones and wallets perfectly dry. Violeta was suitably impressed.

When we manage to leave things get better and we rowe for an hour or so in the delta before getting to Javier. Canoe rowing is rather different from kayak rowing but equally enjoyable, and the scenery is spectacular.

We stay with Javier drinking mate and laughing away at our misadventure for an hour or so before turning back and just making it to Tigre before dusk.

At night it rains and in the morning we wake up to what appeared to me as a strange thing that Violeta proceeds to explain away as normal occurrence. The road in front of the house is a river. Apparently the water floods the roads and houses normally, that’s why they are all, sort of, built on stilts, whit a lowish ground floor with nothing in it, normally used to store stuff that can get wet without harm.

Another day of work for Violeta and another  day of rest for me, in the afternoon we go searching for the Argentinian national team rugby shirt, which we do not find and then meet Eugenia (other friend) and go into BA for dinner and drinks afterward, joined by Moira (other friend).  By now I should have learned it, but obviously I’m as clever as I like to think and I get myself, again into a Falkland conversation which, predictably, has me on one corner and everybody else on the opposite. In the end they came around to my point of view, the first one that is, that I should have learned by now not to raise the subject in Argentina.

No pictures from Saturday unfortunately when we go around again helplessly not finding the rugby jersey (which I have now acquired on Ebay in Wales and it has already been delivered to Scotland) and then to dinner at Pipa and Carolina where I have, without a doubt, the best Asado to date in South America.

Pipa and Carolina are a couple that lives twenty minutes north of Tigre and are a delight to be with, we have a super night filled with laughter educated conversation and a suitable amount of taking the piss out of each other. I’d have to say that if you could judge people by their friends, then Violeta is a fabulous person, but I think I knew that already.

And then to Sunday, as it is only twelve hours since we had meat we invite some other friends for an Asado and I am put in charge of the meat. I can confess, now that it’s all over that I was cool as a cucumber about it … who am I kidding, I was sh***ing myself.

I have seen it done a dozen times in my time in South America, but one thing is to see the plank, another is to walk it.

I start the fire at 11:30, the braces are ready an hour later, I burn the parilla, grease it and start cooking. In the end all are quite complimentary and I even manage to keep a bit of meat back to be cooked like we do in the north, i.e. less.

I got my first applause, it is customary here to clap the assador, and that is that.

Hernam, Paula, Eugenia and the others leave and we rest a while but that is not the end of the day. Soli (below left) is in town from Uruguay and staying with Gaby (below center) in the centre of BA so we go down with the meat and vegetables that are left and have a super evening of mockery, wine, music and friendship.

I hate generalisations but I find that I really like these Argentinians. Maybe it’s just that Violeta and her friends resonate with me but for the ever so slight moment I felt a little lighter on the shoulders.

On Monday morning Violeta takes me to the boat for Uruguay and we give each other a massive hug while I promise to be back soon. This I know is not a promise that I’ll find difficult to keep.